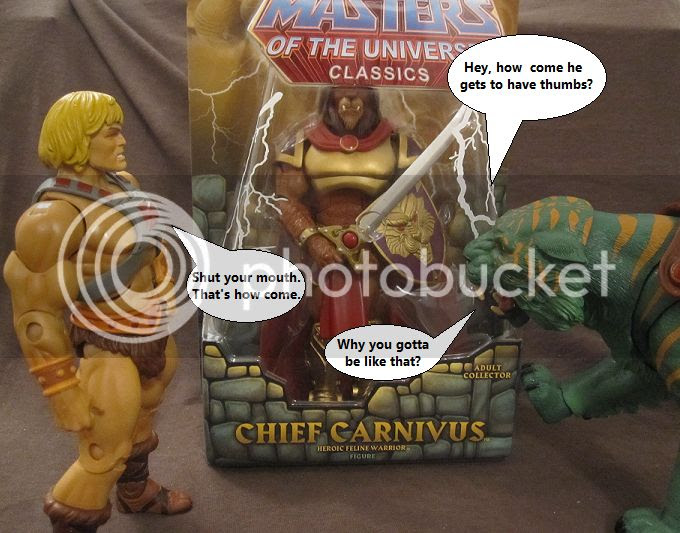 Another couple of figures of which I barely took any pics.  Can't say why.  They are certainly cool figures!  Well anyway, Whiplash is a vintage guy and a 200X guy.  His figure comes with a vintage head and a 200X head, as well as a vintage and 200X weapon.  The 200X weapon is disappointing because it is made to only fit in his open hand...meaning only those with open hands can use it.  And it looks like a super-mega-can opener.  The head is cool, but it looks a little big on his smaller body.  I mean compared to the 200X figure - he was ALL BEEF PATTY.  So we have this beefy head made for a beefy body on a comparatively smaller body.

Personally I didn't think it looked that bad, but I still like the vintage head better; completely based on looks.  I never had 'em as a kid, so I don't really have any nostalgic ties to him.  Anyway, other than the crazy 200X weapon, I think my only complaint was that his tail is just a big 'ol chunk that twists side to side.  I kinda wanted to do more with it.

Other guy is Chief Carnivus, and I did one pic with him. 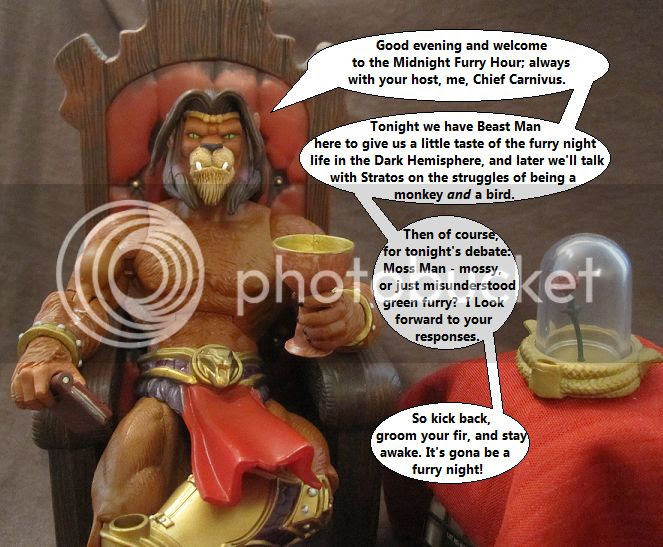 He's also got a podcast, if you're interested.  Just skip the Yiffing Life part; it's gets a little graphic.

ANYWAYS OOOHHH - He was a surprise!  I mean, I didn't expect to like him as much as I do.  His armor and skirt thing don't get in the way of his articulation, so he is open to lots of cat-like poses 'n such.  His weapons are cool, he looks quite regal, and he's pretty much brand new!  That's right: he only ever showed up on the 200X toon, and that's it.  No figure, and no vintage guy.  So it was cool to get a brand new guy, even if he's a royal guy.  I'm only down on the royalty figures because they don't usually fight as much, though this guy certainly looks like a warrior king (chief; whatever) so I imagine he gets into the thick of it often enough.
Posted by Alexx at 3:36 PM