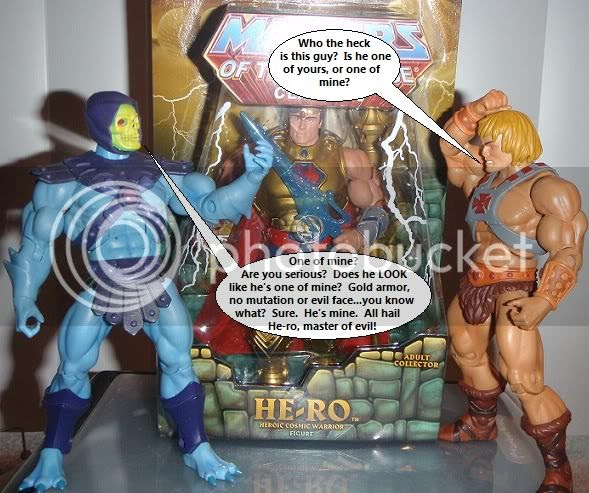 Alright, so his name isn't any worse than He-Man the Redundant.  Or any of the other multitudes of simply named folks in MotU.  It just seems like maybe they should have tried a tiny bit harder with this one.  Just a little. 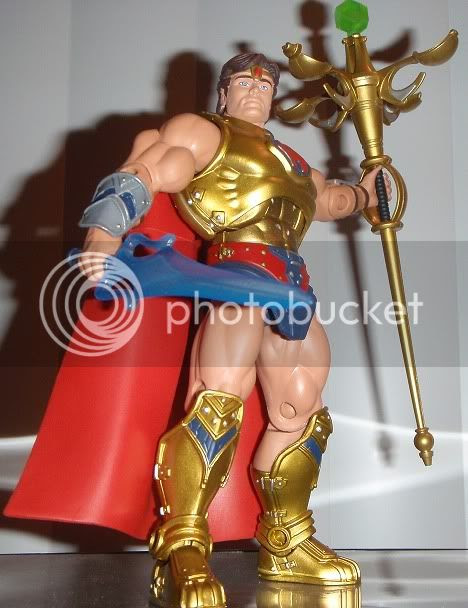 It's the second SDCC exclusive (the first being Faker)!  This is He-Ro's first time in the hands of the masses, since his toyline (Powers of Grayskull) never came to be.  He had a prototype figure, but so far that I know, no one has that and no finished product from that line ever got into stores beyond some badass robotic dinosaurs and some giants.

Falling asleep or skimming ahead yet?  Eh, just look at the pics. 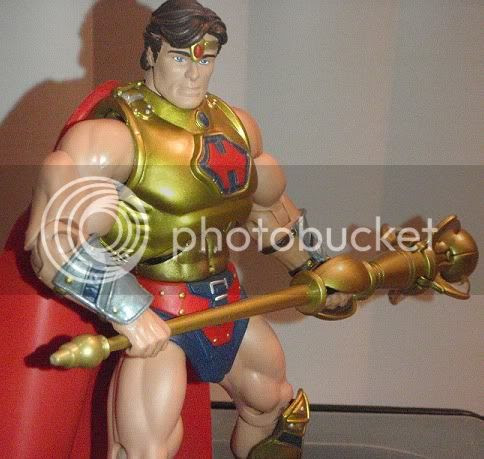 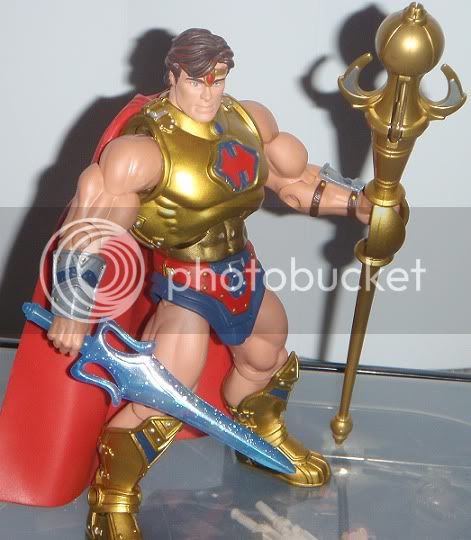 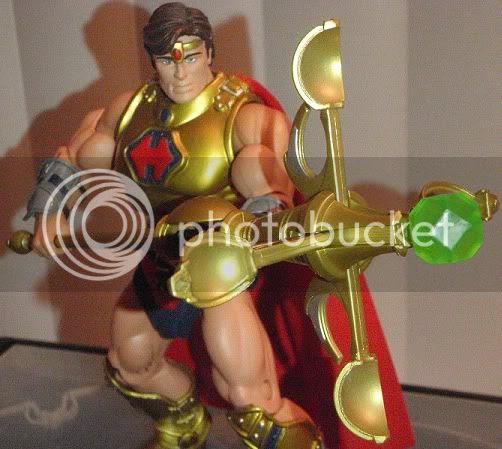 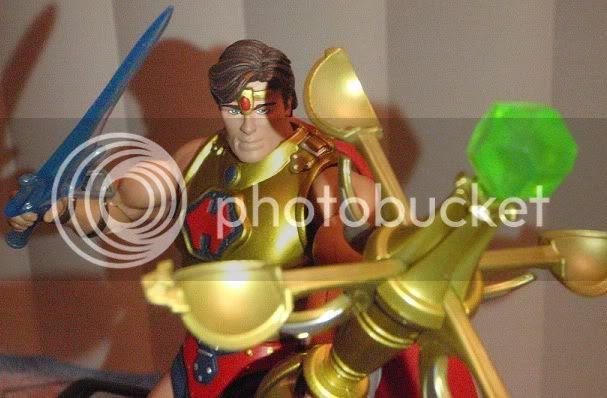 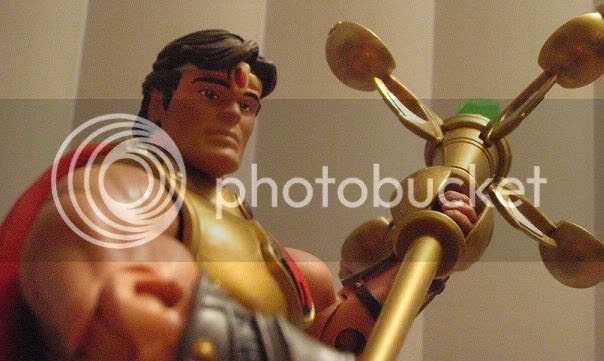 He-Ro comes with his magic staff which, on the prototype figure, would have﻿ popped open with a button.  Here you just gotta open it yourself, because action features are for children - not us toy collecting adults!  Nah, seriously; I'm glad MotUC doesn't have many action features, but a flip-open staff wouldn't have detracted from the figure, I think.  I feel that there are places for action features, but Mattel has a policy to not include them in MotUC, so we won't see anything that could have otherwise been a cool addition to some figures.

Otherwise, he also comes with a translucent blue Power Sword with silver specks painted on it, to show that he's THE MAN.  I guess He-Ro really brings out the Power in the Power Sword.  Either that or the specks are just from him sneezing all over it.  One of those two. 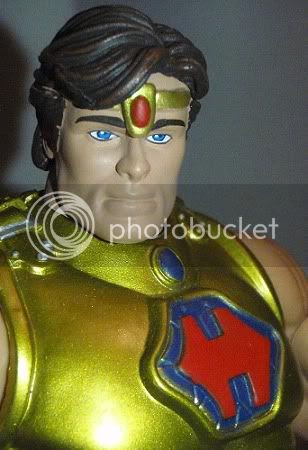 There's a close up of his face.  Look at that guy!  Looks like he's contemplating the very stars within his sword.  Or thinking of cleaning it.  Or he's just staring straight ahead at nothing.  Kinda...vacant.  Heroic, but vacant.  Not a bad thing, mind you!  But his name is He-Ro, for pete's sake!  If there were ever a man that would be a little vacant and simply focused on GOOD and RIGHT and JUSTICE then it would be a man with that face with the name of He-Ro.  Hero Man.  Bringer of all that is righteous and good, but not much of a conversationalist.﻿ 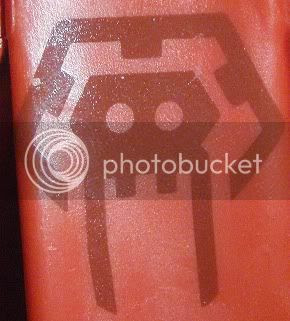 Oh yeah, he's also got a symbol for himself on the back of his cape!  They put that on his grave, I think (shows up in some picture of the 200X Castle Grayskull).﻿ 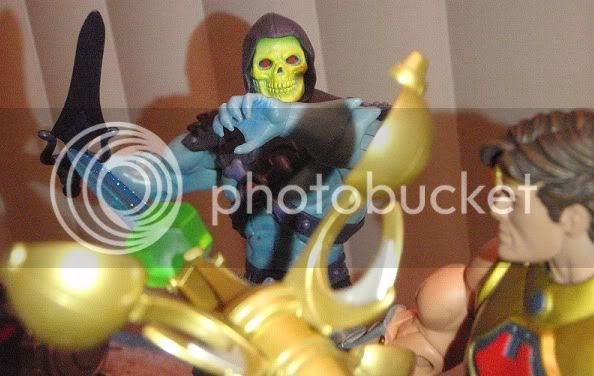 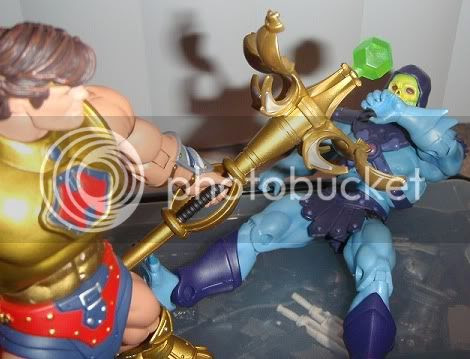 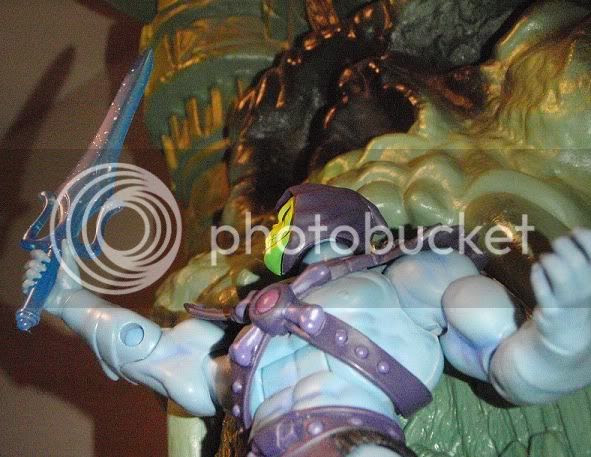 In the end I really enjoyed the figure.  He's certainly different, even if he is actually pretty generic when it comes to the fact that his name is essentially Hero and he looks like the absolute epitome of blind heroics.  Once again, I don't consider that a bad thing.  Gives him character.  The main thing for me though, is that I love prototype, concept, or previously unreleased figures.  He's a neat piece of what-if history!﻿
Posted by Alexx at 11:46 PM