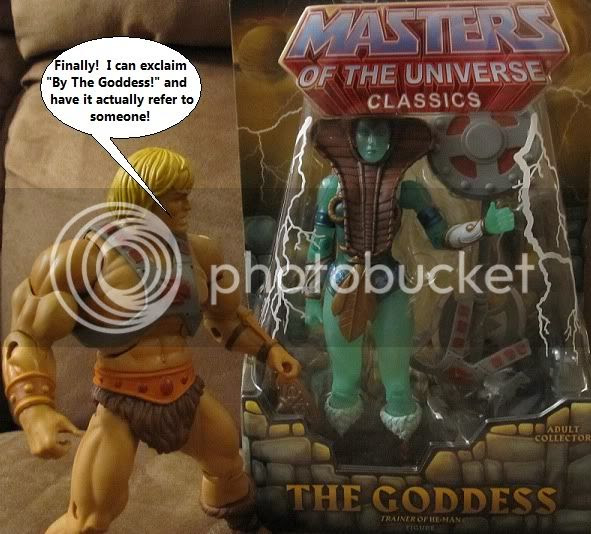 Was Teela not confusing enough for you?  Here, let me make it worse:  This is The Goddess!  Remember how I said Teela was labeled as a warrior goddess, but played both warrior and goddess separately in the minicomics?  Well, when The Goddess - Teela, sort of - showed up in the minicomics originally, she was green.  That's right; a green Teela.  Except it wasn't Teela because she was wearing the snake armor.  Get it?  Teela doesn't wear the snake armor, for some reason.


Anyway, before the cartoon rolled around, He-Man was just He-Man...no Prince Adam or transformation involved.  He got his harness, axe, and shield from the Goddess (she kept this junk in a cave, I guess).  The harness actually provided a force field to protect him from lasers and stuff!  Interested yet?  I know, isn't it awesome?  I have no idea why the cartoon went the superhero route.  This was way more interesting.  Apparently the harness was even an ancient relic from the past so...mysterious technological past!  Awesome!  I love that kinda stuff!  In fact, the old minicomics are probably what gave me that interest.

Anyway, in the original story the Power Sword was split, and the Goddess was the one doing the splitting. 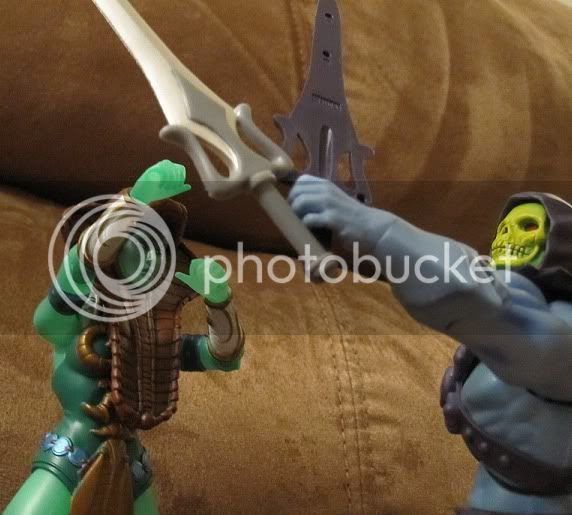 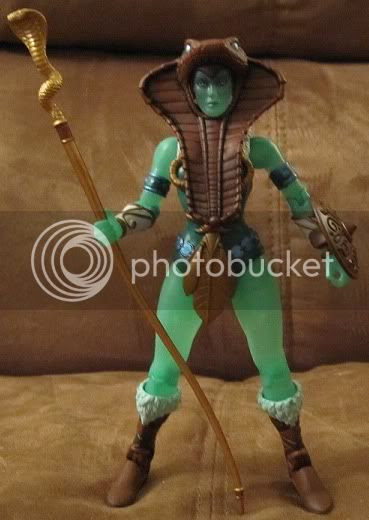 So after that she was green for about two comics or so, then she was white like Teela (still with the snake armor to make her different) then she disappeared and was replaced by the Sorceress!

Now she's back in the same way that He-Ro and King Grayskull are both shoved into this new line with new roles.  The Goddess is now in the same story as the Sorceress, and she still isn't Teela.  I don't fully understand her role, but that's cool 'cause I got my own uses for her.

Anyway, the other important note about this figure is that she came with a spear that was only ever seen in a early drawing when the line was in it's prototype faze.  I thought the spear worked WAY better with Teela, so I gave the Goddess Teela's snake staff (as seen above) and gave the new spear to Teela.﻿ 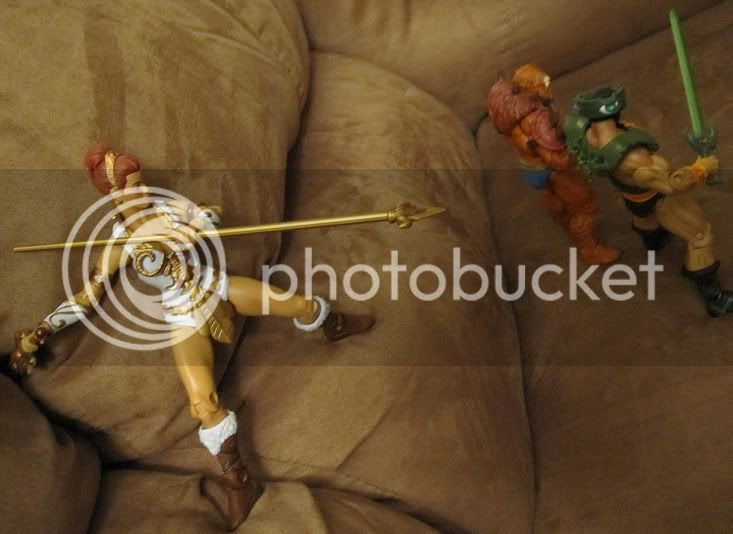 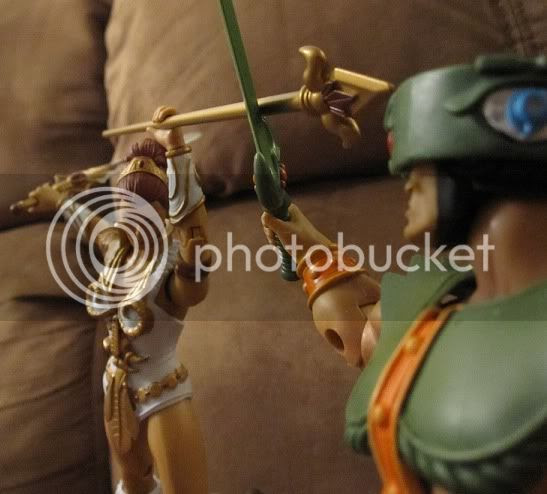 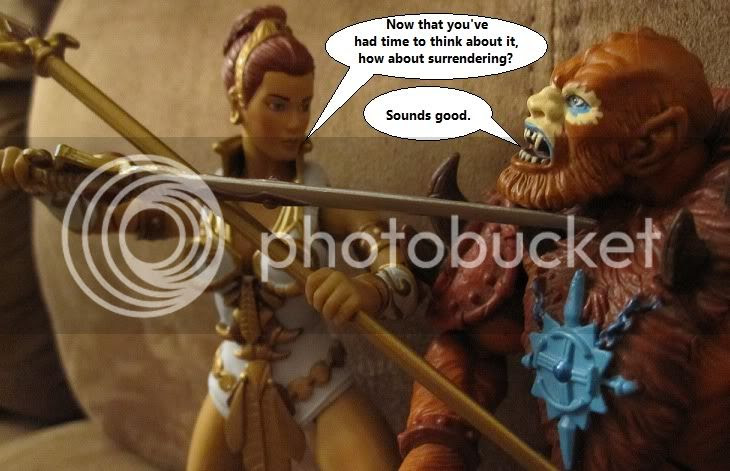 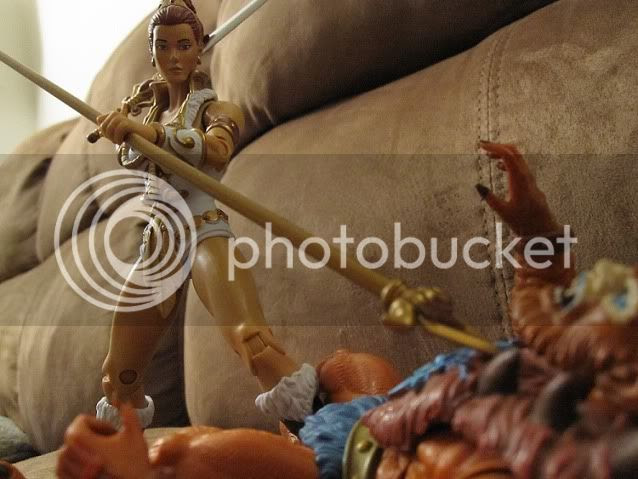 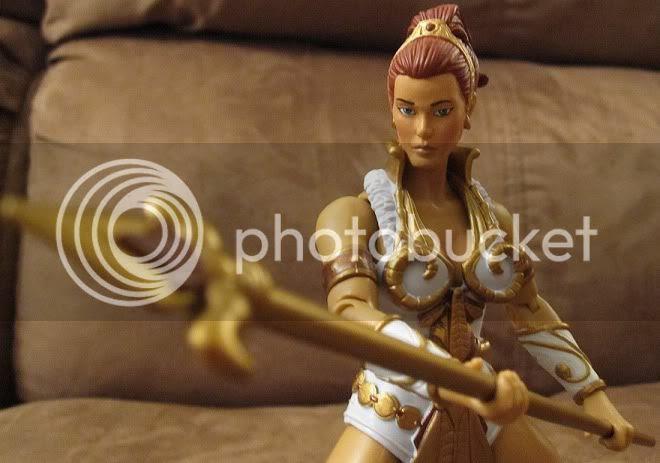 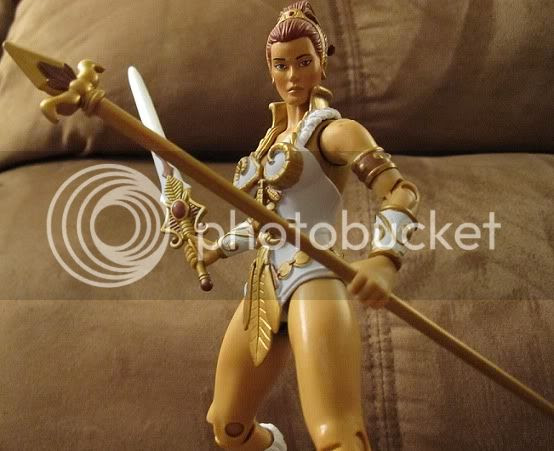 And that's that!  Teela is now complete for me, and The Goddess is the one wearing the snake armor.  'Course that kinda makes Teela's snake armor useless, but oh well.

On a final note: The Goddess apparently had a big problem where her crotch exploded.  Take that how you will. - WAIT no don't take that how you will, let me explain - it's that the plastic that keeps the legs on was weak, and it breaks easily.  Lots of folks had 'em broken right in the package, whereas some folks like me didn't have a problem for a good while.  Sometimes last year mine finally broke; she had been just standing on top of a dresser for awhile and I decided to check the legs after some new posts about breakage.  Low and behold; I move a leg, and *crumble*.  I glued her back together and that seems to be holding, but I still don't want to move her legs much.  Thankfully she looks better standing and looking all important than she does in action poses.
Posted by Alexx at 8:56 PM