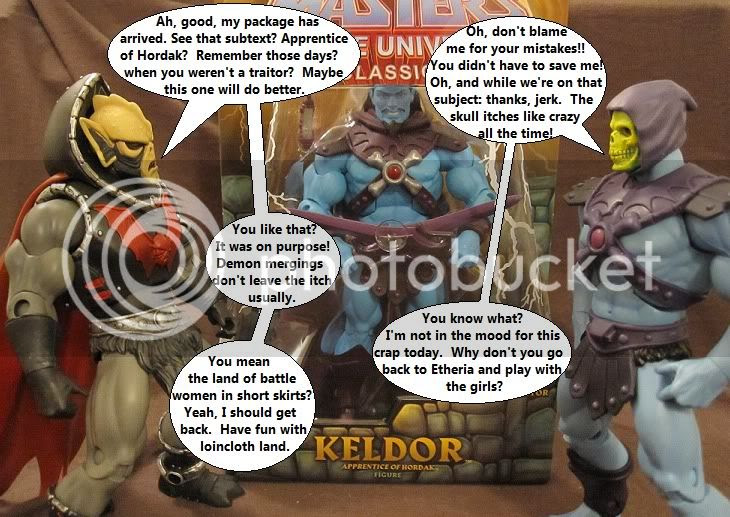 Guess what?  This is Skeletor before the whole face melting thing!  Yeah I know; pretty obvious.  Anyway, this is one of those things that was only fleshed out in the 200X series, sorta.  One of the final minicomics in the vintage days tried to explore the disappearance of King Randor's brother Keldor, and Skeletor tried very hard to counter the search so that they never knew of the truth behind Keldor...but the minicomic story was never finished, due to the death of the toyline.


So later they bring this back for the 200X cartoon and toss it right in your face like acid!  In your face.  The first episode shows Keldor and his band of evil doers trying to obtain the Power of the Elders (or something like that) and Captain Randor (at the time) fending them off.  Keldor didn't like his brother, so obviously he came with a plan to kill him.  Keldor, before this point, had apprenticed himself to Hordak (though not directly; only through speech.  Hordak was till trapped in another dimension) so Keldor had all this cool magical power at his disposal.  Naturally, his plan for killing his brother involved simply being superior in every way - fighting prowess AND magical might. 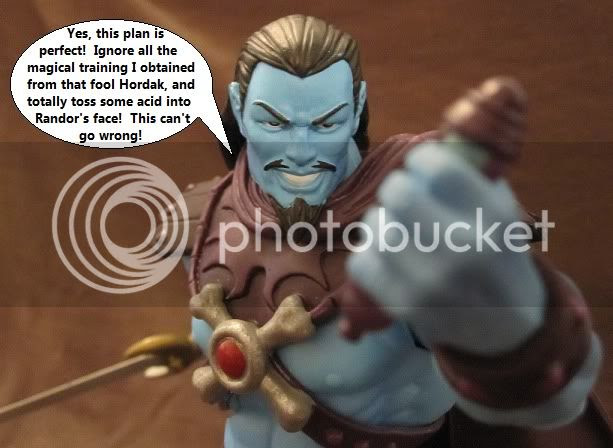 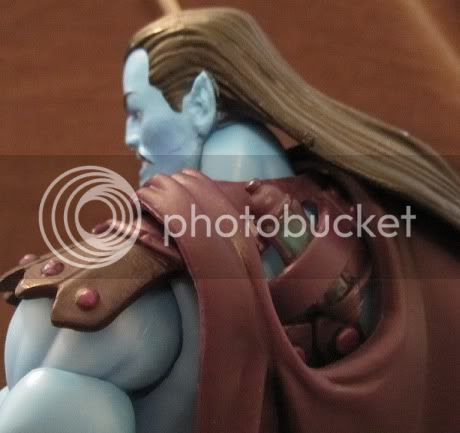 HA!  Nah, he threw acid in Randor's face.  Screw everything he'd ever learned.  'Course, maybe it was a last resort, since he was losing the fight?  In any case, Randor deflected the acid with his shield and it spalshed all over Keldor's face!  OH NOES!  What is a Keldor to do when his face is currently melting?  Well, Keldor runs back to Hordak and begs for a cure.  Hordak obliges by - well, for the MotUC story anyway - merging Keldor with a demon (Demo-Man).  This does a few things 1.) Saves his life.  2.) Gives him a ton of power.  3.) Leaves him with a floating skull head, and 4.) Drives him batshit crazy.  All of these things are bad for Hordak, so I'm sure he was smacking his forehead bloody for a long time after that.  Ya know, since Skeletor destroyed the place where Hordak would have been able to cross dimensions (at the time).

So that's Keldor in a nutshell!  What about his toy?

Well, Keldor is pretty much all old parts save for the head, cape, and acid vial.  The armor is Skeletor's, the legs and thighs as well, feet from...well anyone that used those boot feet.  Arms are pretty much standard Tri-Klops arms, and of course the loincloth is the Skeletor one.  Sadly, however, the only reused item here that is not that great, are the swords.  Sword.  Whatever.  Same thing. 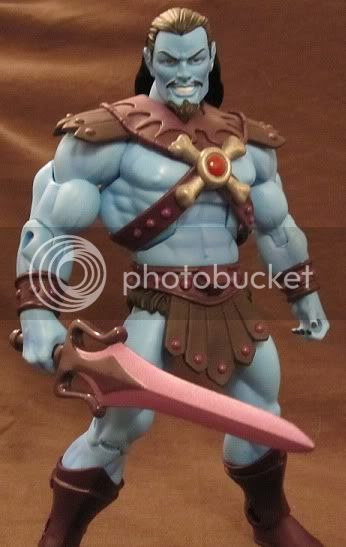 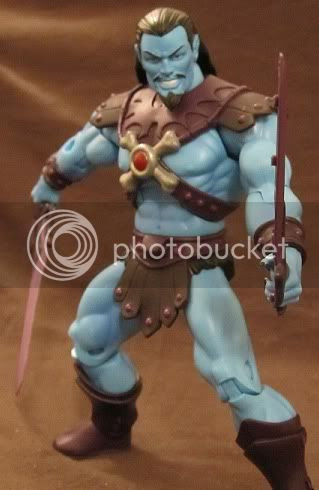 I've spoken of the Mattel "Classics Machine" before, where they take things and make them look like they might have been originally in the vintage toyline.  So when it comes to 200X items, they just take the 200X out of them.  Like Zodak's staff; the 200X item was a highly detailed staff based on Zodac's gun...so when they made Classics Zodak, they retrofied the 200X staff by taking out the detail and making it a staff with ends that looked exactly like Zodac's guns!  A double ended gun staff, pretty much.

I had expected the same of Keldor.  You see, Keldor used the original design for the 200X Power Sword, as I have explained.  The sword that Skeletor uses in the 200X toyline is what was originally going to be the Power Sword.  Mattel liked the mechanical sword with He-Man better, so they made that the power sword, and the sword below just became a very ornate, but normal sword that Keldor and Skeletor carried around.﻿ 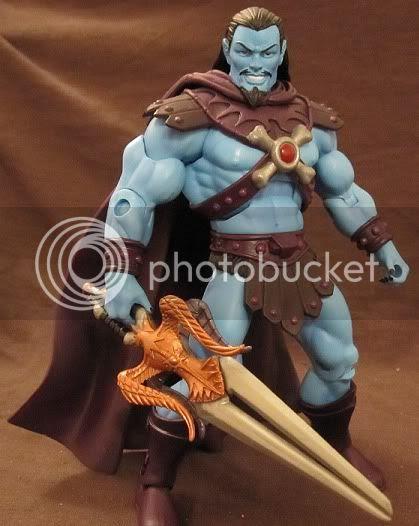 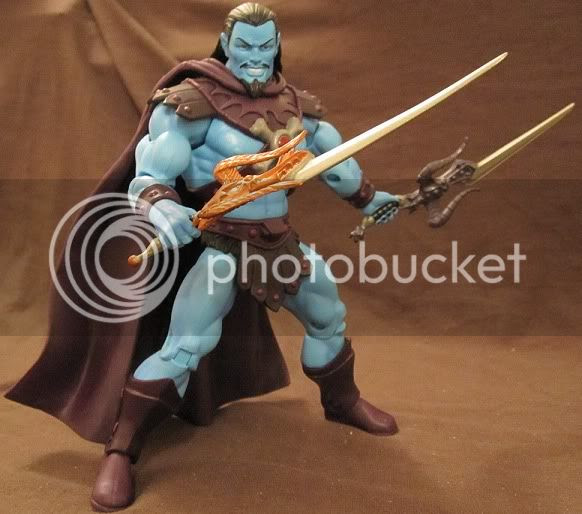 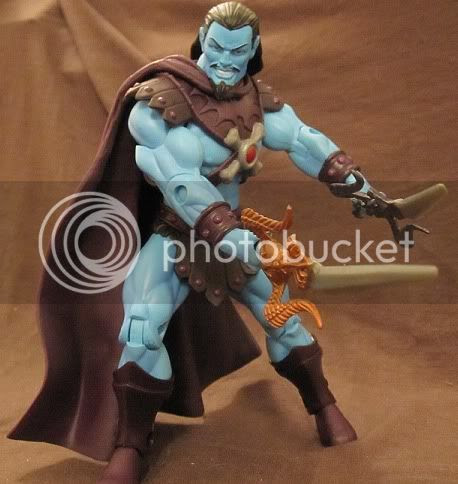 So for the "Classics Machine", I expected them to make some simplified versions of those swords.  Take out the detail like the bird motif on the gold one and the skull motif on the purple one and just make them some plain swords.  Sadly, they took this the other way and gave him the two halves of the normal Power Sword that you see further up.  Neither sword is really a full accessory, and they kinda look dumb wielded apart.  I thought it was kind of a lazy way to do it though...I guess it is technically correct.  I just thought they would put more thought into it, because when they show the sword in the 200X toon, it has none of those details on it!  It's just a gold side and a purple side, but with absolutely no detail drawn on.  I figured they would go with that.

Bah!  Doesn't matter.  They're sort of fixing it now by making the dual sword for the Classics line and shoving them in with someone (dunno who yet).  Still, the Classics design has the detail, but simplified.  It's cool, and I love it...but it just feels like they missed the point.  They don't need the detail; they just could have been normal, everyday, unadorned swords.  That didn't look exactly like the Power Sword.

My next task was to root through all my weapons and try to find something that looked good with him.﻿ 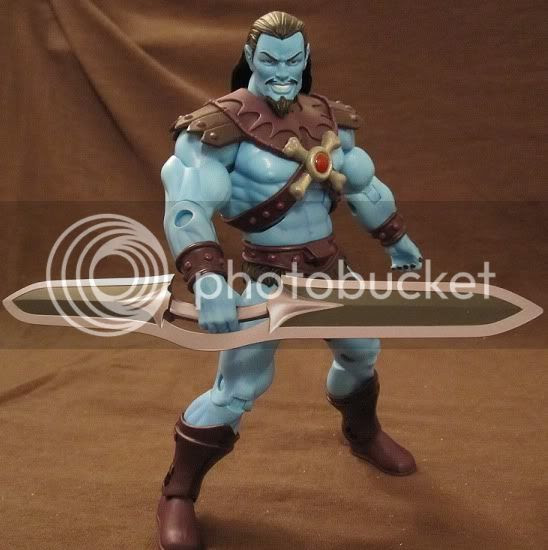 Double sword from the mass produced Eva from the Evangelion "movie" 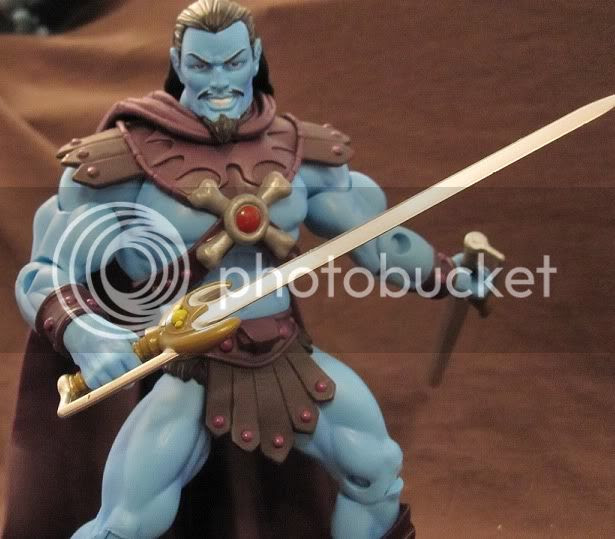 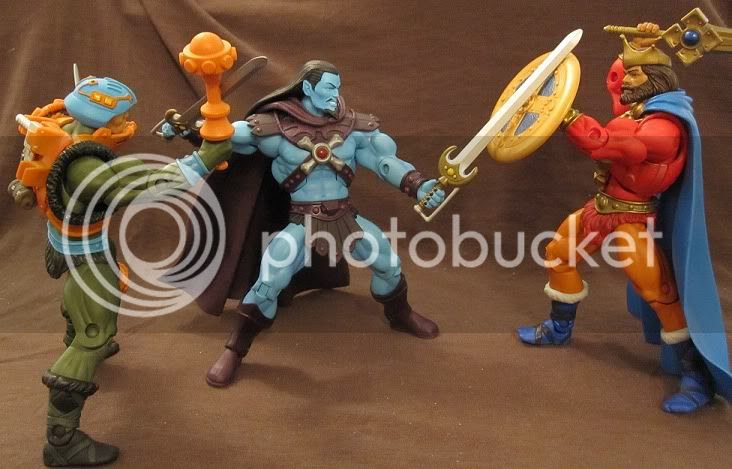 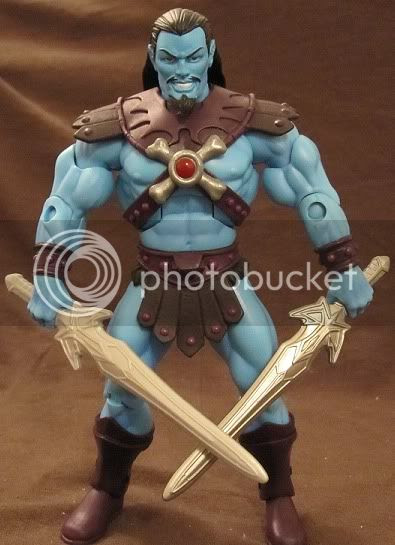 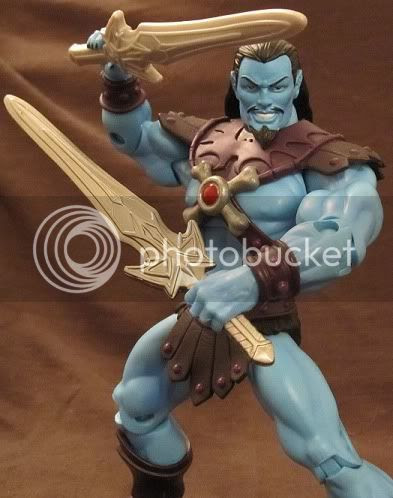 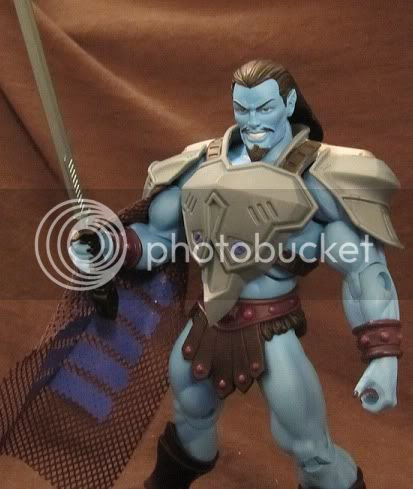 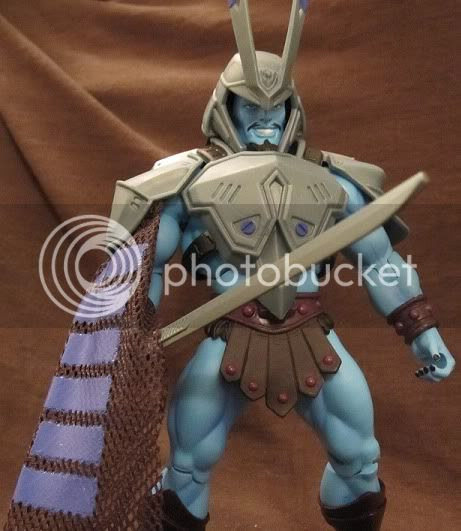 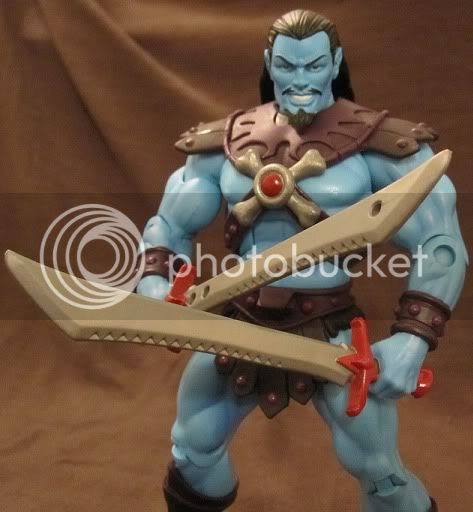 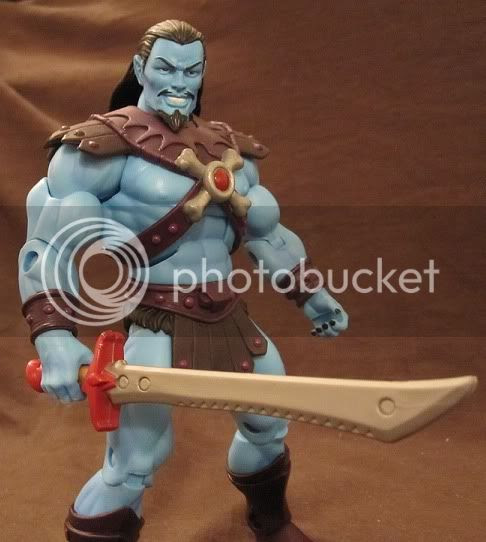 Weapons and armor from Sigma 6.  Dunno why I tried the armor; it fits, though!  If you've got any Sigma 6 around (and as a decent, toy loving person - you should) then give the accessories a shot with MotUC. 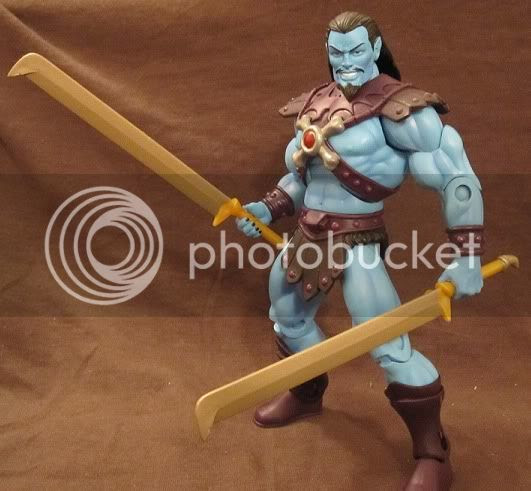 And finally a pair of sword from the Xevoz toyline.

The rest below are just the standard "me having fun" shots.﻿ 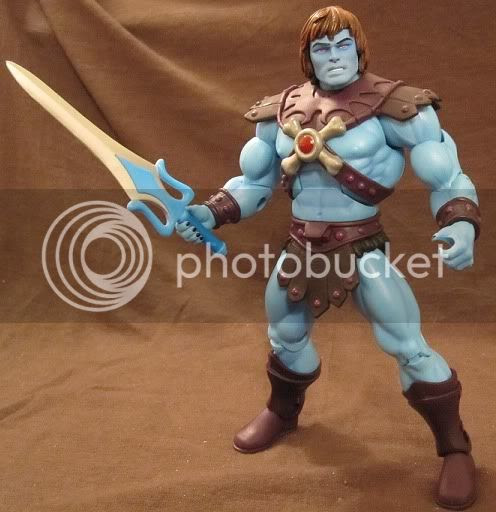 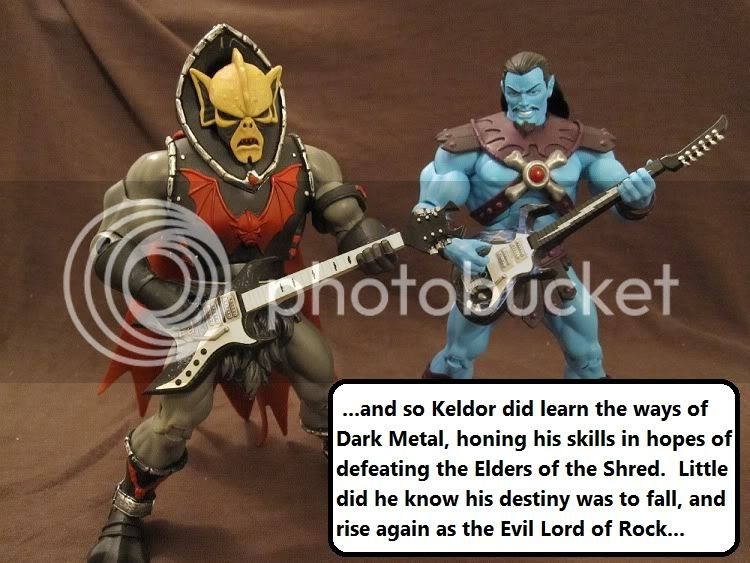 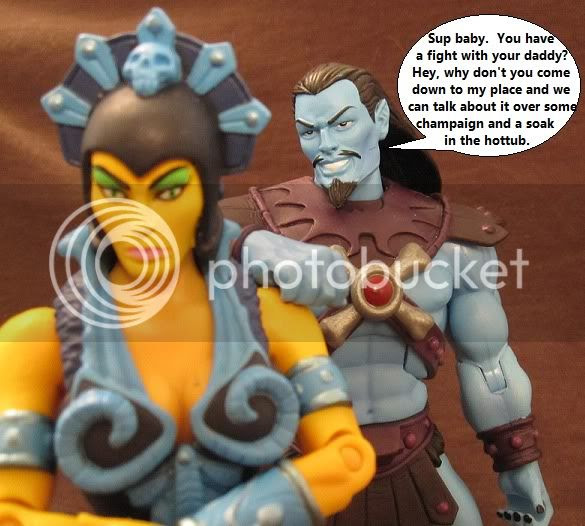 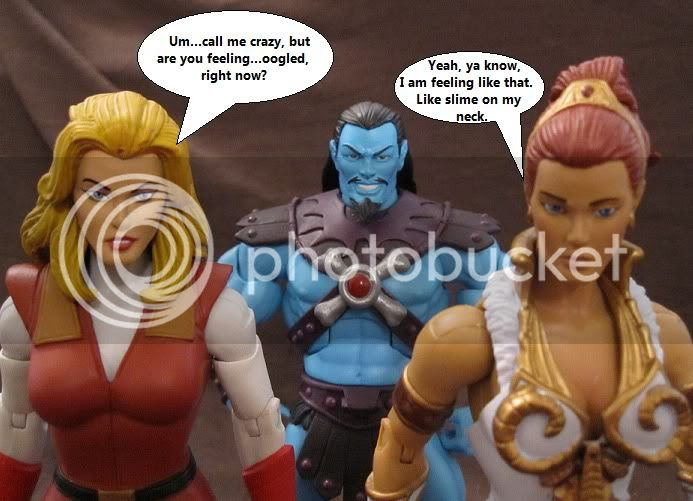 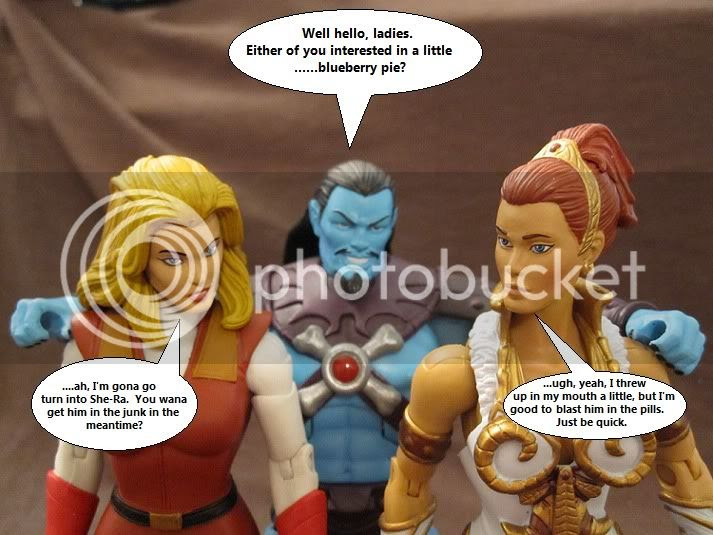 MAN that is a creepy smile!  And I didn't realize it until someone on He-Man.org pointed it out, but Adora is his niece.  EEEEWWW.
Posted by Alexx at 4:23 PM