It's funny...fans seem to like toy jokes, but they do NOT want those same toy jokes invading their toylines!  This is what happened with SDCC 2010 when one of the exclusives - just one of them - was based on a Robot Chicken sketch.

So that's the Mo-Larr joke.  This is how it was translated into a set: 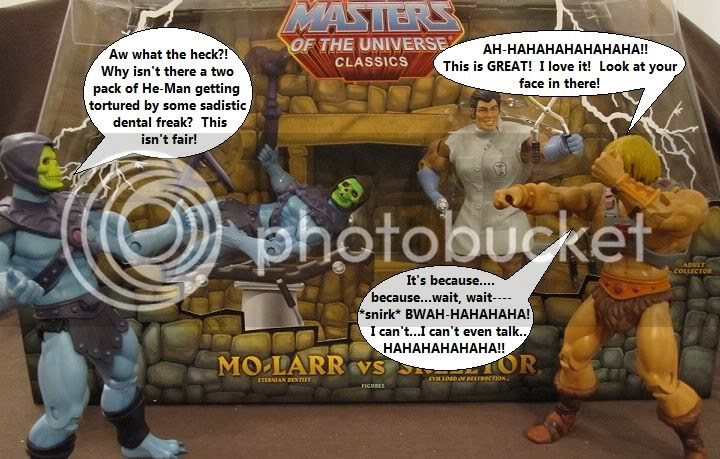 As usual I'm sorta covering up the package shot with words (that'll get worse; I eventually stop caring if you can see the package or not) but you get the idea.  It's a great presentation, and one of those times when I'm sad to open it up and destory it to get the figures out.  You get Mo-Larr, all his dental tools (the drill, floss - with real rope, the pincher thingy with a tooth, a tooth picker thing, and a dental mirror), and an extra Skeletor with a sad/annoyed face and missing a tooth.

I mean...how else are you gona get hilarious shit like this?  No one ever does this!  An actual set based on a joke!  I may have slightly agreed that this wouldn't have been a good idea IF it were the only exclusive...but it wasn't.  It was an extra.  And ya know?  People still complained.  Mattel thinks ahead knowing someone is not gona like this, they make TWO exclusives to compensate, and people still go off on how terrible this is.  Ah well, at least they've mostly forgotten about it and have moved on to other new additions to the Classics line that just do not "belong" (depending on personal opinon).

The second exclusive was so dripping with vintage that you just know it was made specifically to offset the people chewing on thier keyboard in anger from the first one: 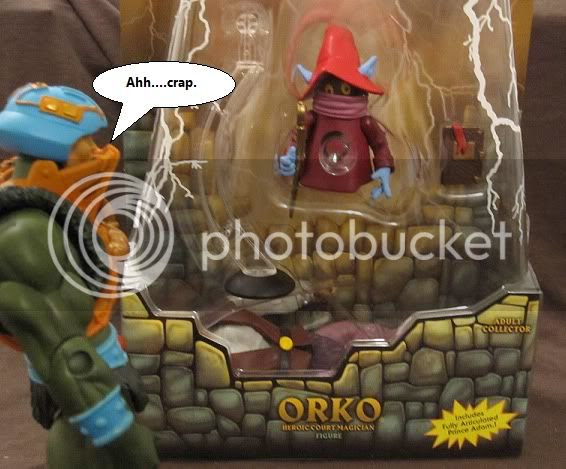 It's Orko----oh wait, Prince Adam is in there too.  OOOOOH SNAP, another joke at the expense of the poor fans!  'Course I didn't see as many folks really complaining about this; it's really just Mint on Card folks that wanted a Prince Adam on his own card.  I can understand, but I also can't help but laugh at the Adam figure shoved into the bottom as an "extra" to Orko.  Good stuff!

Rest of the pics are just random jokes that came to me, so not much a review here (though you should be used to that so far). 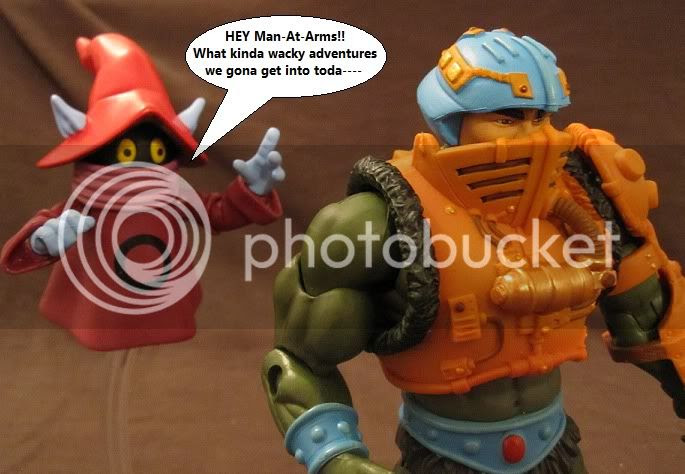 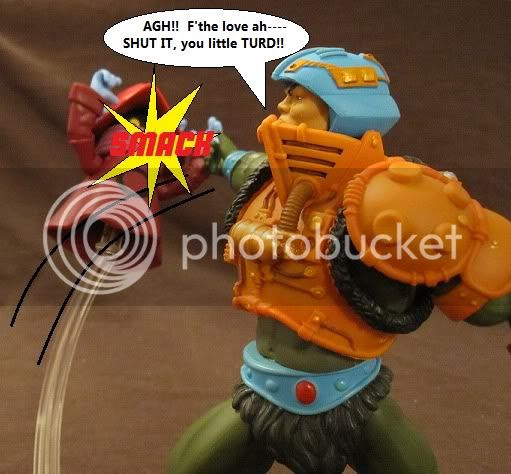 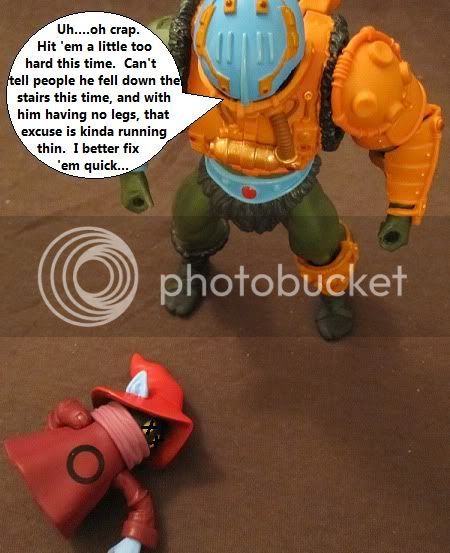 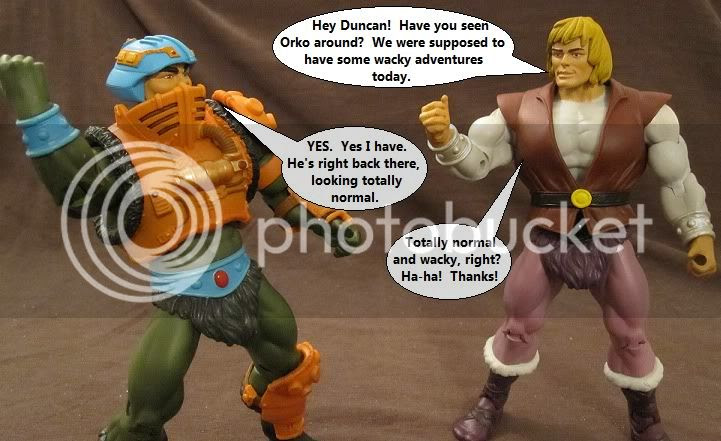 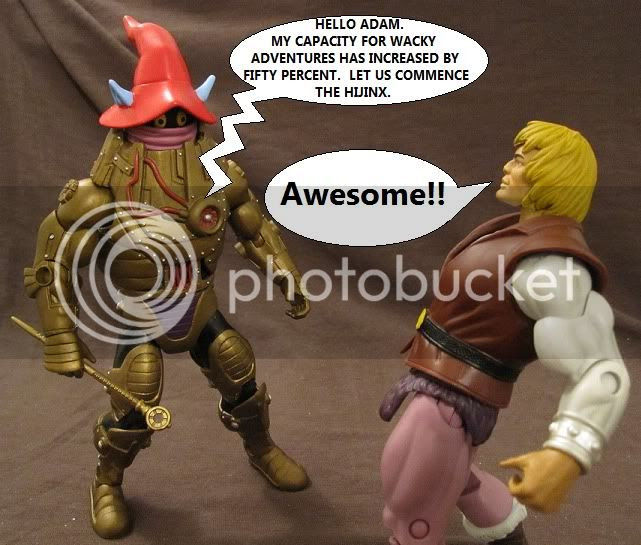 I don't think I was ever that big a fan of Orko.  I had his original figure, which had a feature that made him spin and shake like a drunkard, and he came with a little coin magic trick.  The thing I remember the most were the little coins that had the character's faces on them...dunno why I liked those.  Otherwise Orko was a cute little distraction for a minute or two and then I went back to kicking ass with barbarian warriors.

They did a nice job translating Orko to this new toy form, though!  The vintage one was always kinda...lanky and tall, and they did the same to the 200X one (as well as pumping him full of badass Black Mage serum).  This one finally has the proportions from the original toon and...well, even the 200X version on the toon was a bit short!  Dunno why his toys were always so lanky.
Anyway, he's got nice articulation (as much as he would need) which inspired some spell pics. 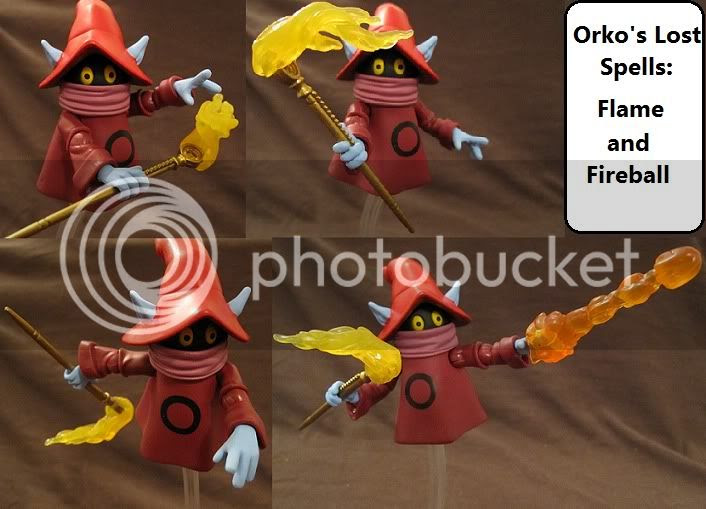 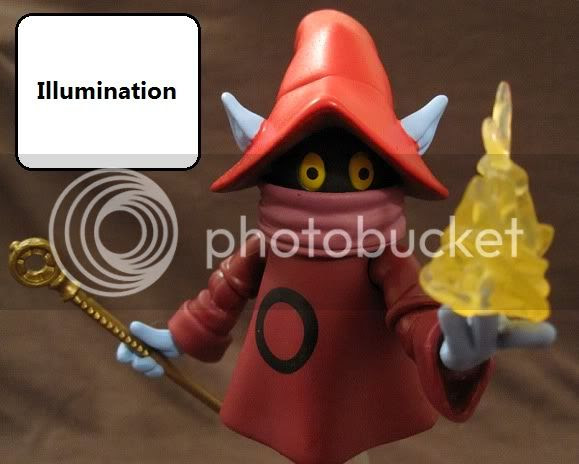 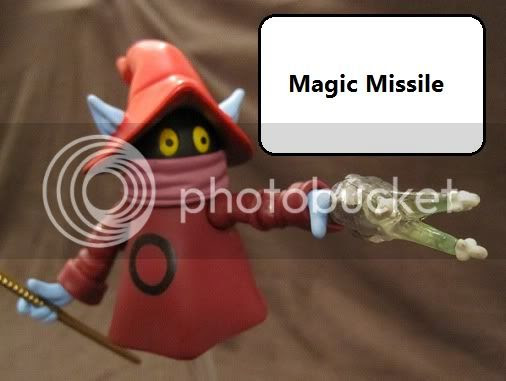 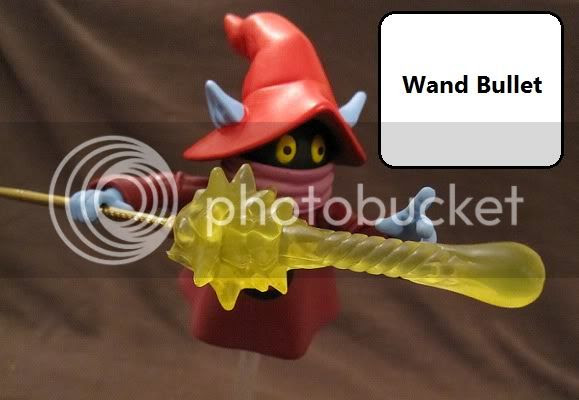 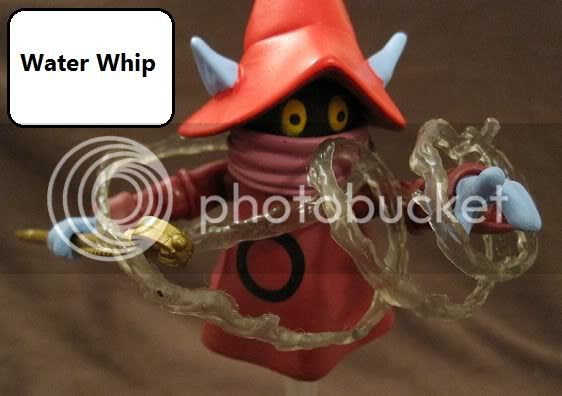 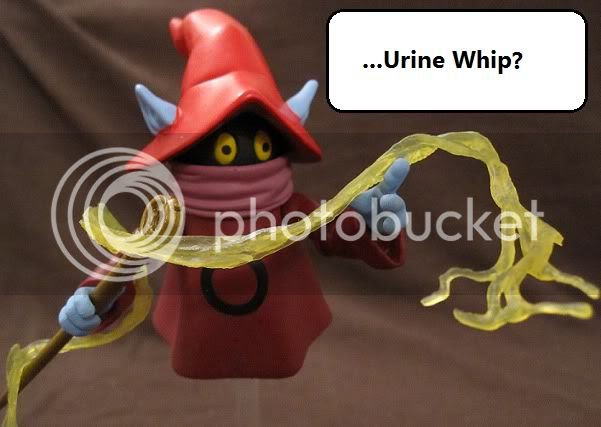 I mean, why not?  The guy usually spends his time screwing everything up, so I figured I would give him some useful spells that don't backfire.  His role in both toons was bascially comic relief but...ya know, without the comedy.  I get that he was supposed to be funny, but I don't really remember him much, and he didn't do much different in the 200X toon.  I can't deny that they made a cool figure, though!  And really, in the end, that's all I'm in this for.  If the toy is fun to play with - I'm happy.

Now, on to the playing! 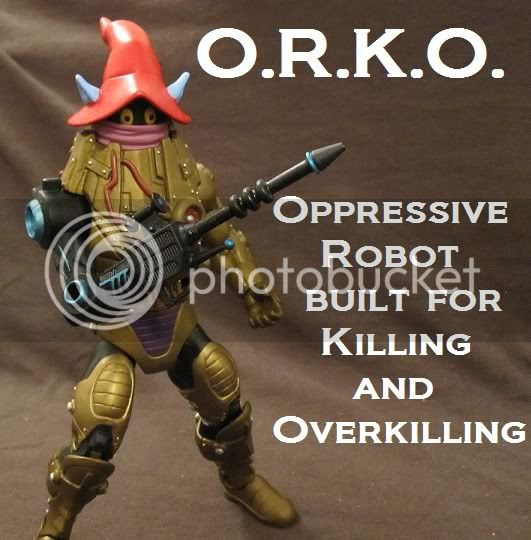 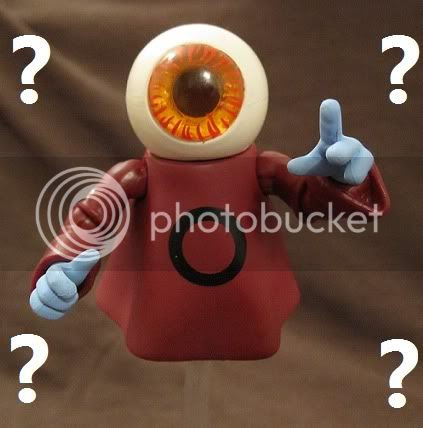 Having interchangable heads in this toyline was sheer brilliance.﻿

Anyway, I should show off Prince Adam a bit. 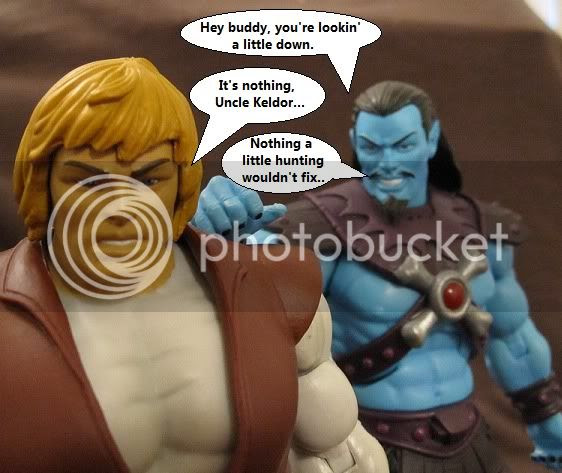 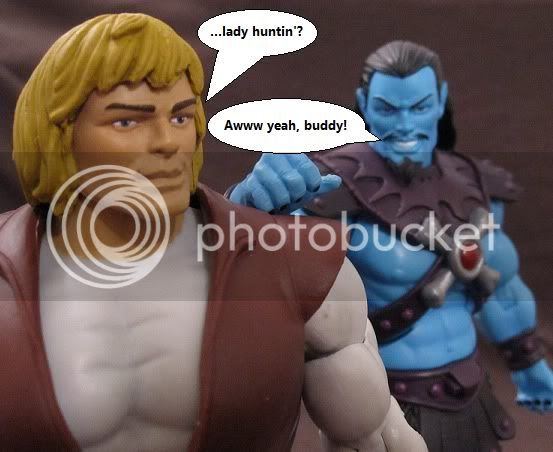 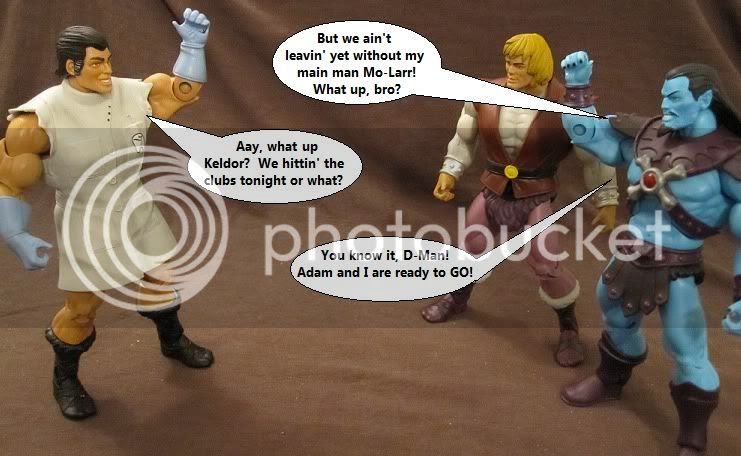 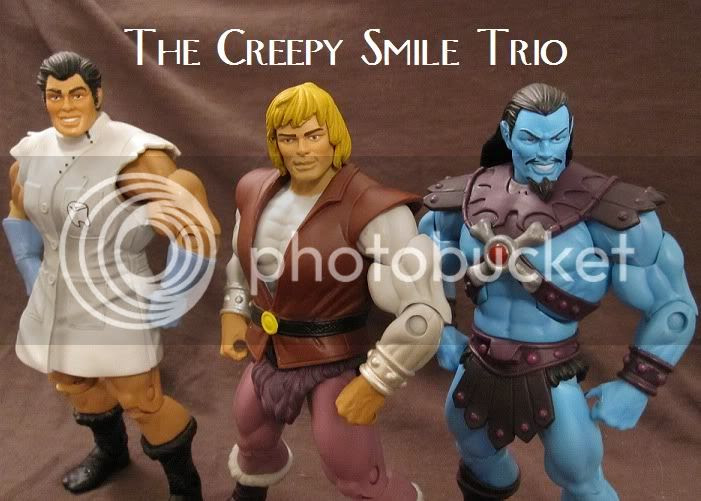 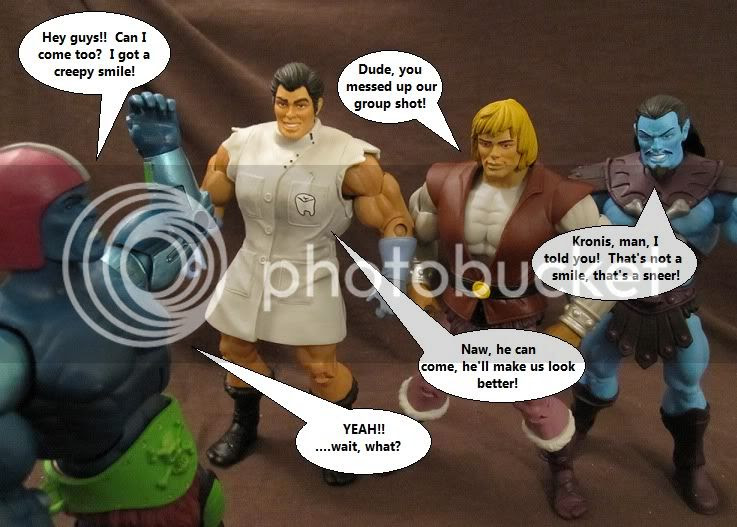 Adam comes with two heads; a normal He-Man head and a...creepy smile head.  It's supposed to show the fact that Adam Clark Kent's it up by acting contrary to his He-Man persona.  So Adam is all smiling and happy and lazy 'n all that.  I dunno though....that smile.  All their smiles!  Makes you wana watch your back, ya know?

Anyway, Adam was cool and vintage, and he covered my nostalgia needs.  Bascially you're gona get one or both from MotUC figures: Nostalgia, or Awesome.  Guys like Draego-Man (brand new figure created by the Four Horsemen, the sculptors of this toyline) cover the Awesome, but not the Nostalgia.  Guys like Trap-Jaw get both - Nostalgia AND Awesome.  Prince Adam just covered the Nostalgia for me, because his other feature is just...comedy.  I had the figure when I was little, and I like having the new one, but I don't honestly like the whole transformation bit and Adam is just goofy as heck.  So I very much like having him in the collection and I certainly won't get rid of him, but he's also one of those figures that is just strictly there for the comedy; kinda like Mo-Larr.

And I'm ALL for comedy.