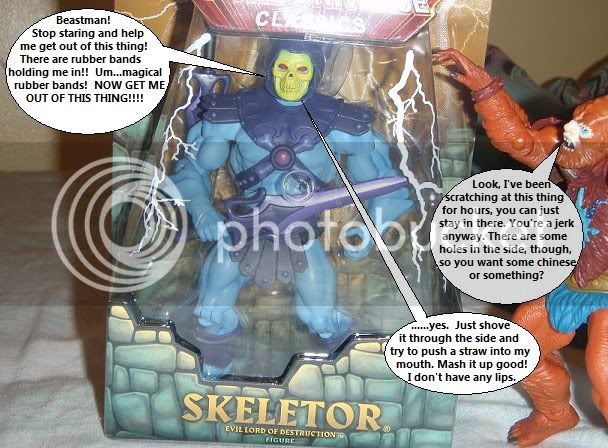 OH MAN I was so excited for Skeletor.  This guy was my absolute favorite when I was little - apparently he was delicious.  I'll remind you that I was very young for the MotU toyline (MotU born in 82 while I was born in 83), so these things doubled as chew toys.  Still, Skeletor went with me everywhere.  I carried him around the house, took 'em in the car, took 'em to bed, and so on and so forth.  I don't know why he was my favorite; all I've got to go on is stories from my parents and my Grandma: one of which involved me calling him "Hehe" all the time because of the way he laughed in the cartoon.  My Grandma even tried to correct me, but apparently I was insistent on "Hehe" so much that I put a finger to her lips and corrected her back.

Strangely enough however, this was not my main Skeletor through most of my youth.  This one was around for the early years and no more...because of the chewing.  I don't even need anyone to tell me this story; I remember it well.  Nice and short too: I told you that I took him everywhere - even to sleep.  So I guess I found out that I chew in my sleep, because one morning I found his head bitten off and still in my mouth!  So much for the Lord of Destruction.  Taken down by a child's teeth.

Anyway: on with the show!  This is still before I acquired any backgrounds beyond whatever was back there when I took pics.  I was crazy to get my hands on Skeletor, so when I got 'em I took a bunch of pics. 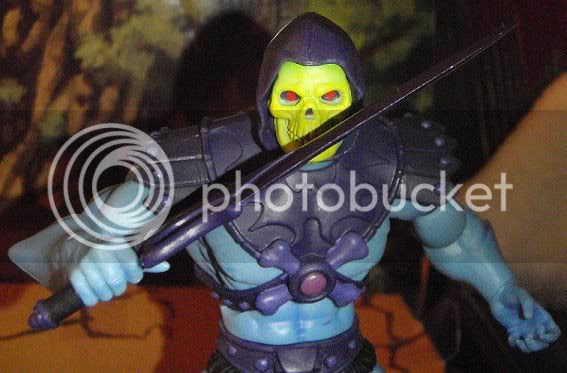 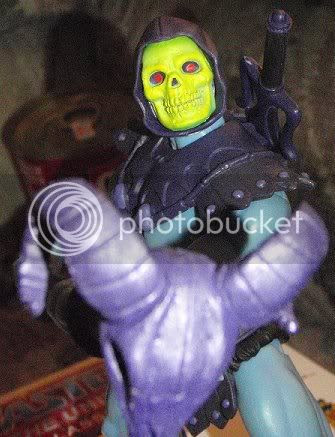 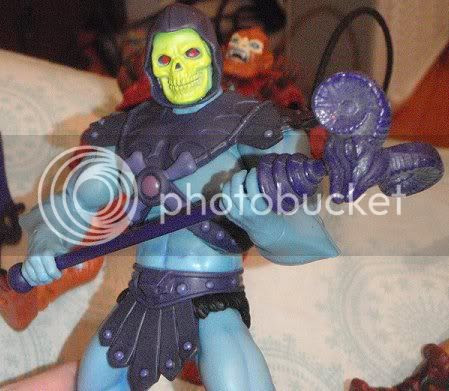 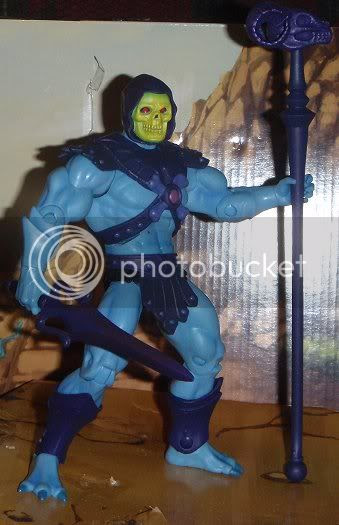 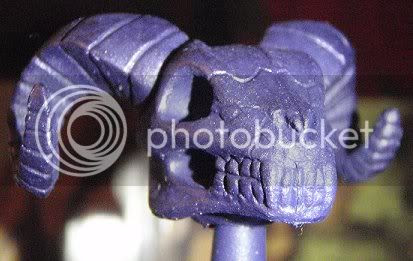 One thing I was a little disappointed with was the size of his staff.  If you compare the size of the original to the original figure versus the size of the new one against the new figure the thing is towering over him!  On top of that, the ram's head on the staff is heavy, so it often spins his wrist around when you're trying to pose him.  'Course I've gotten over that with time; I even got some extra staffs and tried cutting out a section of it, but in the end I still go with the normal unaltered one. 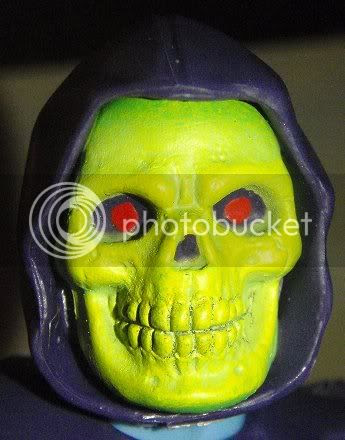 I LOVE the skull on 'em.  Thankfully it wasn't painted like the original figure and it really looks creepy.  I'm glad I got 'em, since they eventually went and painted later Skeletors with the classic goofy paint job. 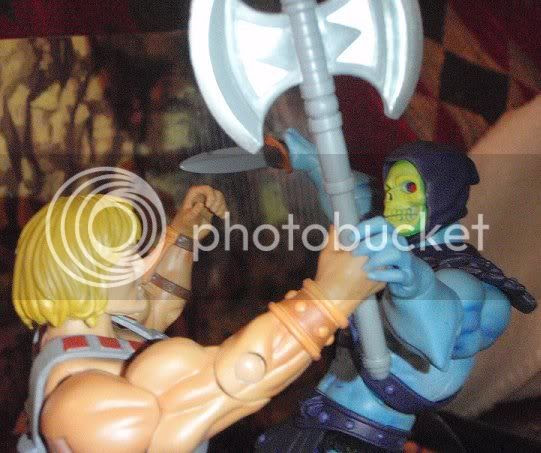 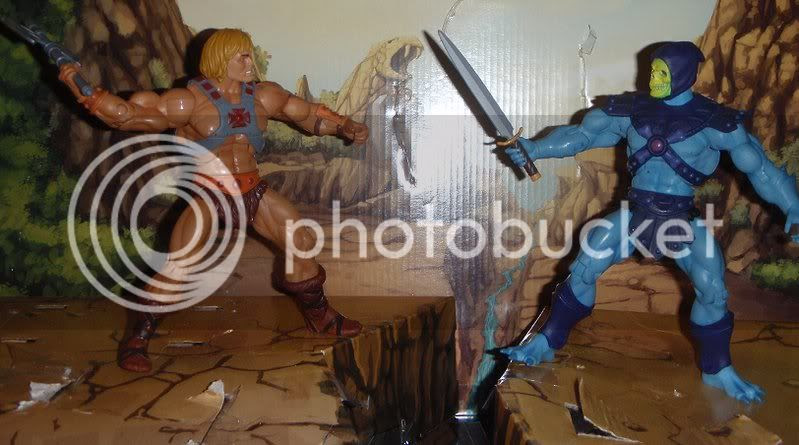 There I have Skeletor holding a sword from some Dragonball Z figure because I thought it looked a little like the sword he held in the early minicomics (of which they simply referred to as an "energy blade.")  The background is part of a package for this Ultimate Battle Pack for the 25th Anniversary toyline for G.I. Joe.  Obviously I didn't manage to keep it intact, but it worked for the time. 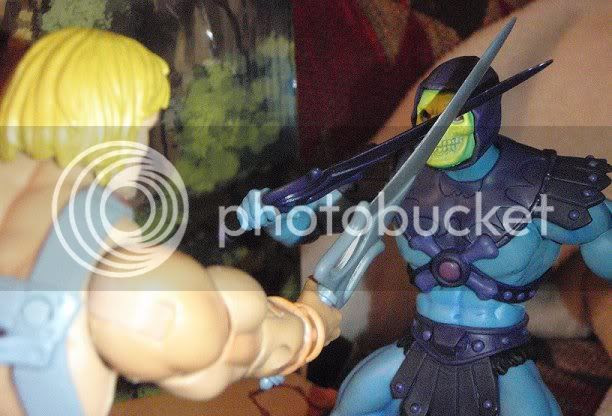 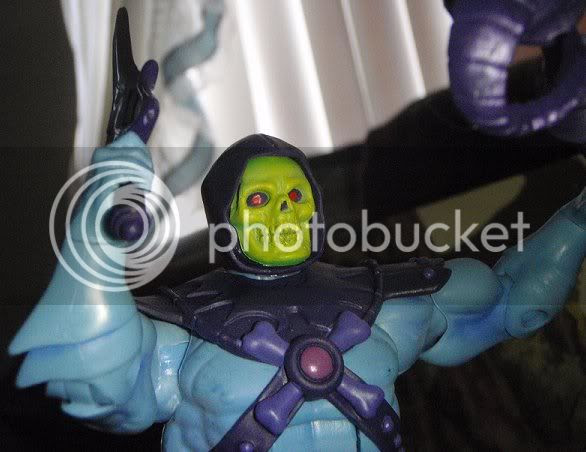 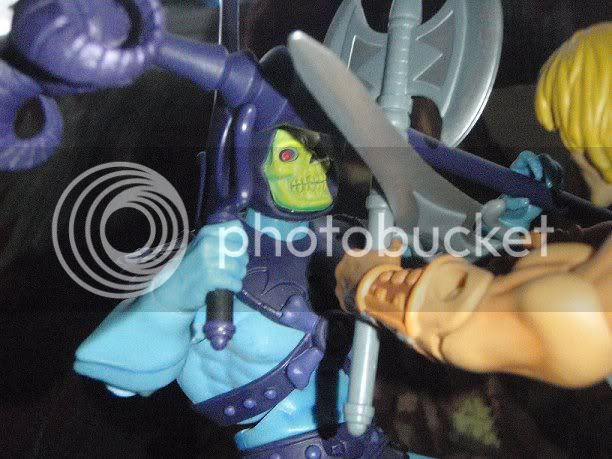 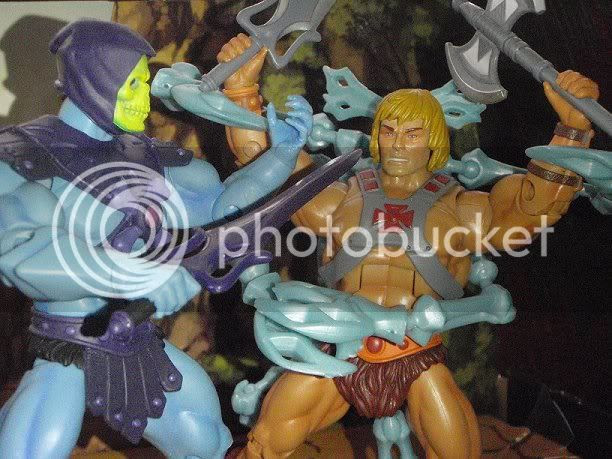 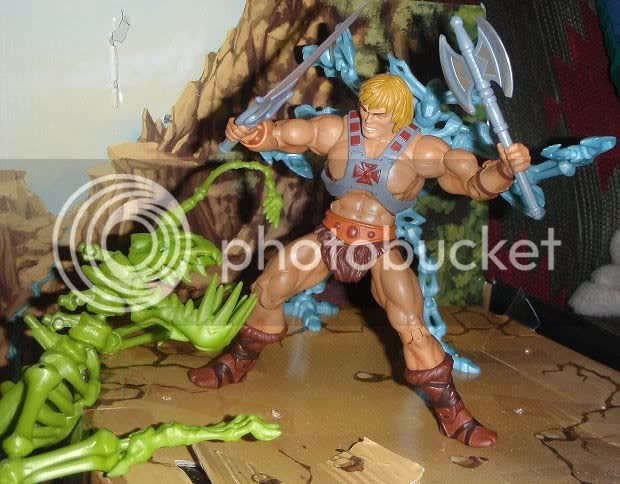 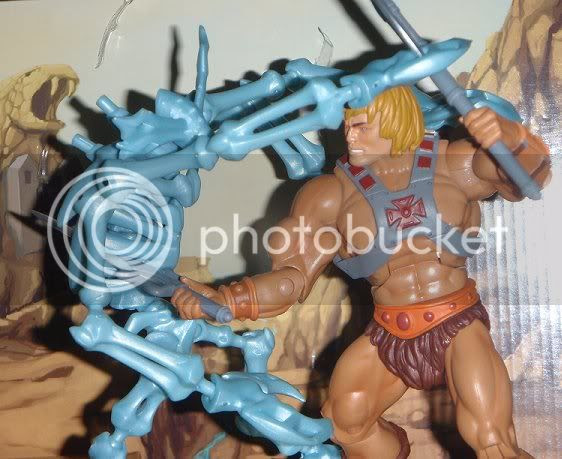 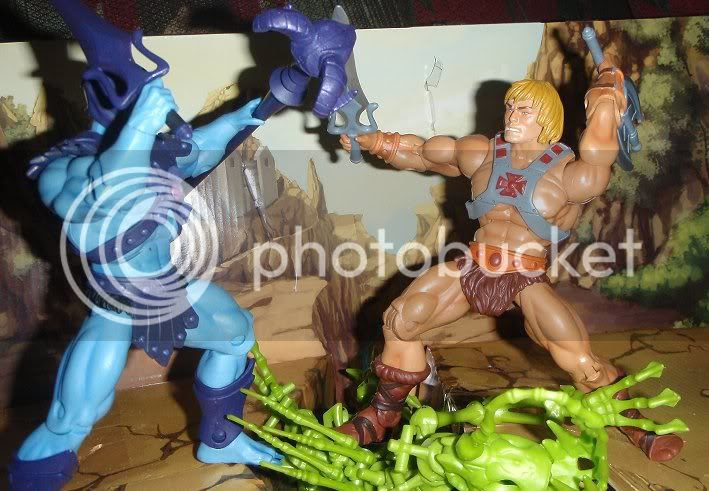 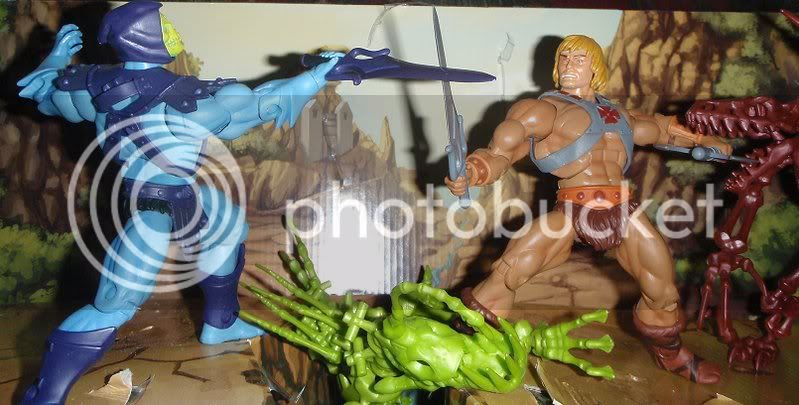 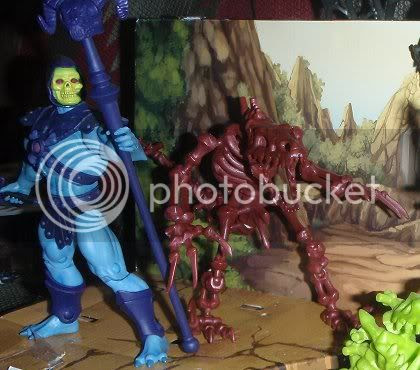 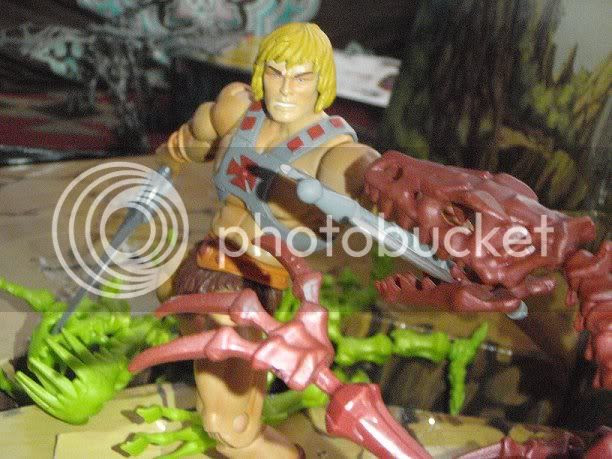 Skeleflex works so perfectly for Skeletor!  You'd think he would have had more bone warriors in his various incarnations.

Anyway, the next two was just a bit of messing with some of the weapons from the MotU toyline from the early 2000's (I usually refer to that as the 200X series). 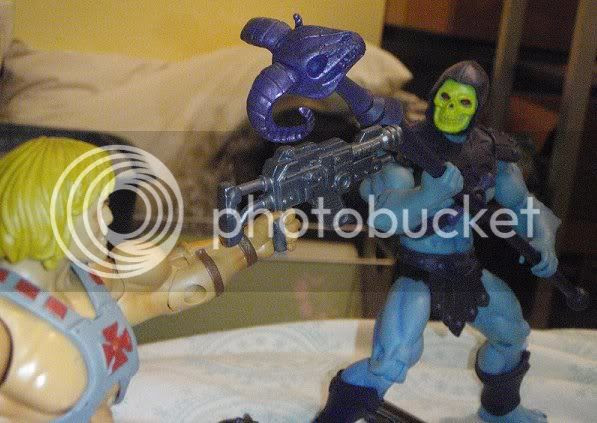 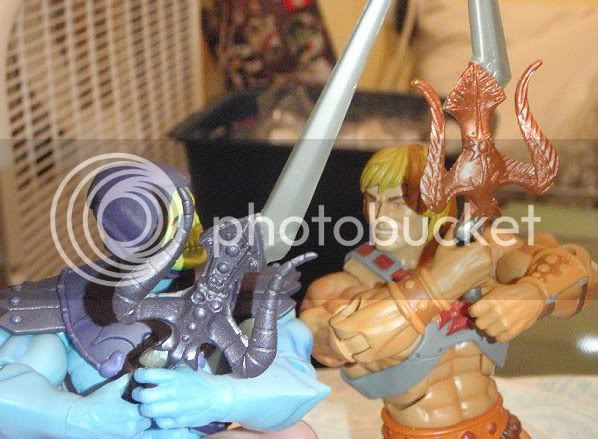 The gun on the top is from the 200X Castle Grayskull, and the pic right above has them with the sword that came with 200X Skeletor.  You'll see that the sword fits together and has a purple "bad" side and a gold "good" side.  Well, that's 'cause that was supposed to be the power sword for the 200X line!  The 200X line would have originally taken place after the vintage MotU line, with Skeletor owning both halves of the Power Sword, and He-Man having to use a mechanical Power Sword to turn into He-Man.  Well, Mattel apparently liked the mechanical sword better as the new Power Sword, so a whole new story was made and Skeletor ended up getting some very...unique swords!  I knew I wanted to see how they would look in the hands of the two rivals to sorta reflect the sword's original purpose.﻿ 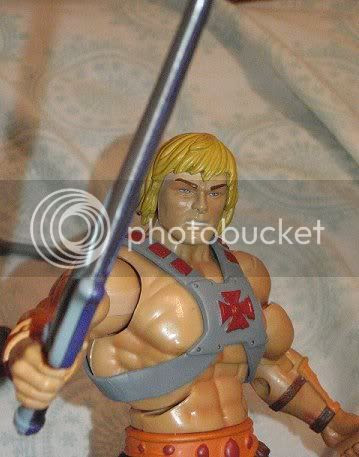 And, of course, to display the vintage versions ability to stick the two halves of the Power Sword together, the MotUC versions came with separate half-swords that could stick together!  I thought it was a cool little detail.﻿ 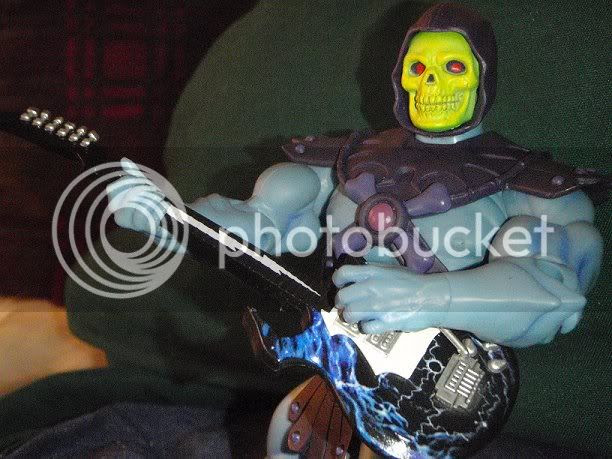 Finally...Skeletor with a guitar.  I found these little guitars at Toys R Us under a Guitar Hero toyline, and once they went on clearance I bought 'em all (I think there were four or five two packs of just the guitars).

Skeletor impressed overall.  I think the only problem I had was with the size and heft of the staff and his open left hand.  I don't like when a figure can only hold stuff in one of the hands (which is why I later got the re-release of Skeletor that had two holding-hands).
Posted by Alexx at 6:17 PM