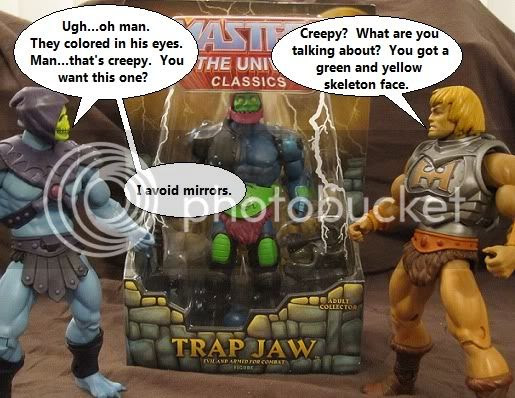 ...or else you'll end up like Trap-Jaw.  Well, depending on your choice of story!  The original minicomic had Trap-Jaw as an inter-dimensional criminal that was brought to Eternia when Skeletor tried to open up Castle Grayskull (because the Castle was originally this mysterious dimensional nexus).  Our new mashed-together story of MotUC makes Trap-Jaw a mix of the 200X story and the old one.  They are keeping the criminal thing, but also bringing over his previous name of Kronis, from 200X.  He was Kronis before he became Trap-Jaw, and Kronis worked for Keldor (Skeletor's name before the whole face melting business).


The story from an origin comic in 200X is that, when Keldor became Skeletor; Kronis became soured by Skeletor's new rule.  Guess losing your face and being melded with a demon changes a man.  So Kronis argues, gets thrown out of Snake Mountain (Skeletor's snazzy snake-shaped mountain hideout that is totally not shaped like a snake for any important reason or anything) and ends up having to fend for himself in the wild craggy wasteland that is the Dark Hemisphere of their planet.

Turns out things didn't go all that bad for Kronis.  Why?  Well, he's a badass.  Kronis spends his time ambushing gang leaders and snappin' necks so that he can control said leader's gangs.  He just keeps doing this.  Over and over until he's got himself a friggin' army.  You can probably guess that he walks this army straight to Skeletor's snakey doorstep and is all like "Knock knock BITCH!"

Then this huge battle takes place as Kronis's army takes on Skeletor's best minions and-----nah, I'm just kidding.  Skeletor doesn't send a single named minion out and just raises an absolute shit-ton of skeletons to fight the army, then stands on top of his mountain and rains magical lightning bolts down until no one is left.

So to top off this story: Kronis don't care 'bout none 'o this and climbs the mountain like a deranged squirrel so he can get at Skeletor.  You already know what Trap-Jaw looks like, so you can probably figure out that this ain't the best plan.  Granted, Kronis does get some nice punches and kicks in!  Sadly those hits are parried with 1.) a gigantic magical blast that burns his face green and takes off his arm, and then 2.) a MASSIVE uppercut that completely shatters Kronis's jaw into delicious salty bone chips (the deliciousness is negligible, but don't act like you're not curious).

Finally, Skeletor lifts Kronis up by the neck as Kronis's tongue flops out his throat-hole.  Kronis makes one last ditch effort to strangle Skeletor, but weak as he is, Skeletor mistakes this as a cry for mercy.  So?  What do you do with a fallen minion that you just beat to a literal pulp?  Throw 'em to your mechanic Tri-Klops and tell 'em to fix 'er up!

And so you have a Trap-Jaw.﻿ 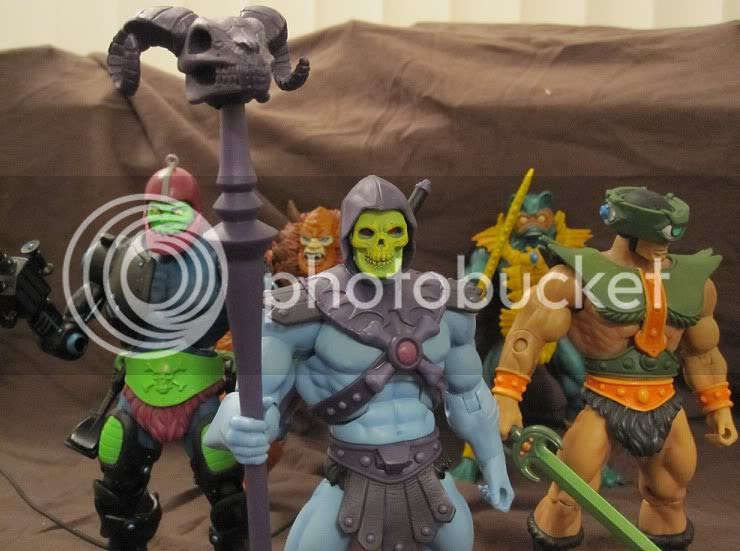 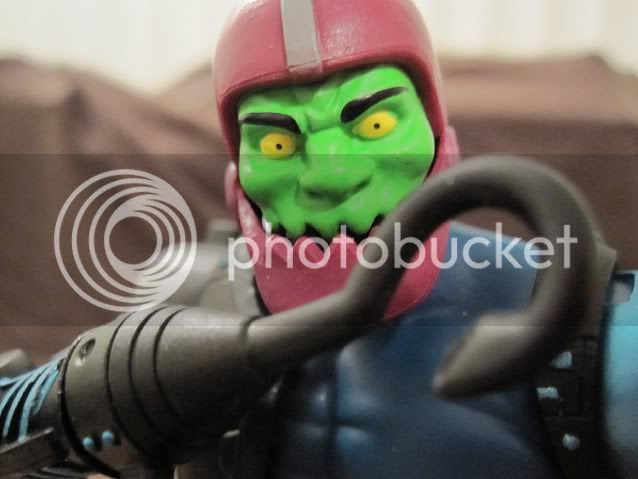 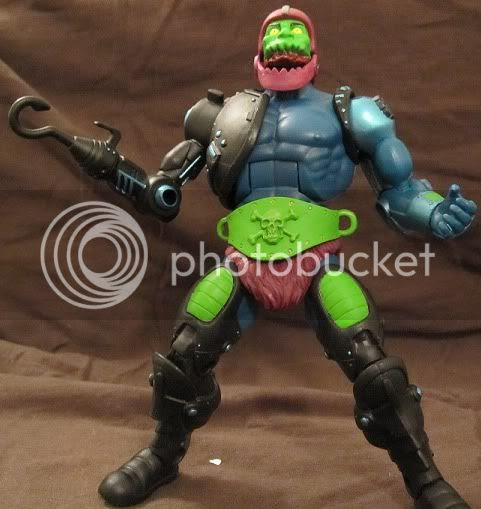 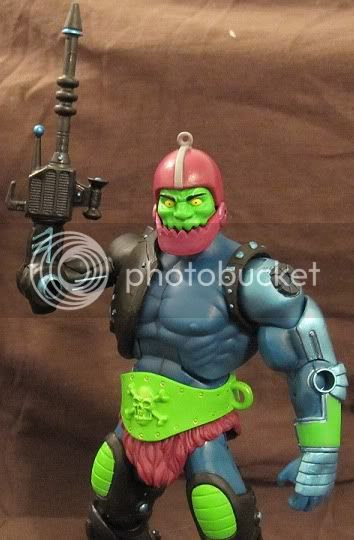 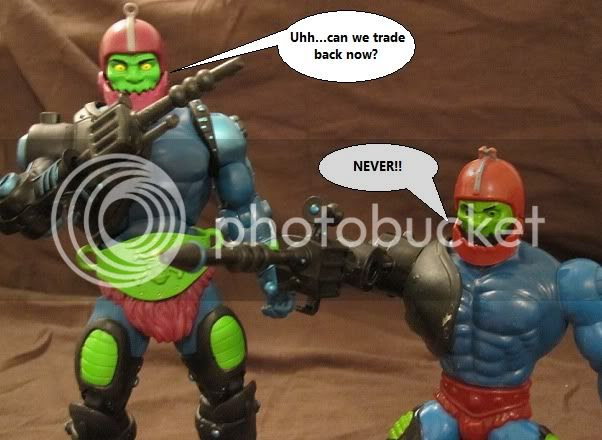 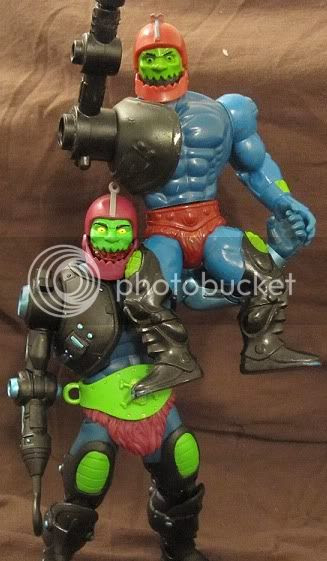 Here's another one for the list of Toys You Must Have.  Trap-Jaw has everything his vintage figure had: three different arms parts including a gun, hook (for pirateness), and a claw.  PLUS: Crazy eyes!  Yes, his eyes are yellow now, 'cause as you can see on the original; his eyes were just little black dots.  So now he's nuckin' futz!  Look at that son of a bitch!﻿ 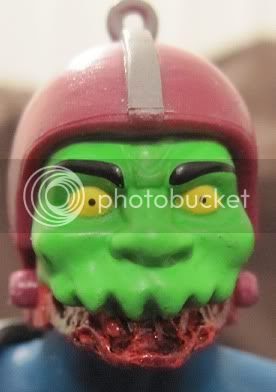 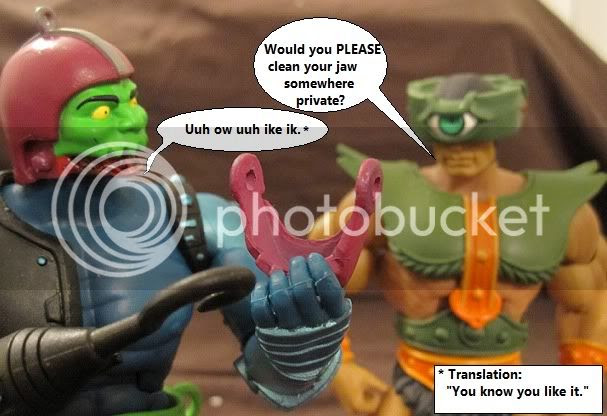 AH!  OH GOD, NOT THAT CLOSE!!  Seriously?  Did they do what I think they did?  Yes!  The Four Horsemen friggin' sculpted a bloody mess of a tongue and whatever was left of his jaw under his trap.  Now that is what I call extra MotUC flair, and another reason why Trap-Jaw needs to be in your collection regardless of your interest in MotU.  This one breaks out and becomes one of those toys that just rocks all the other toys.﻿ 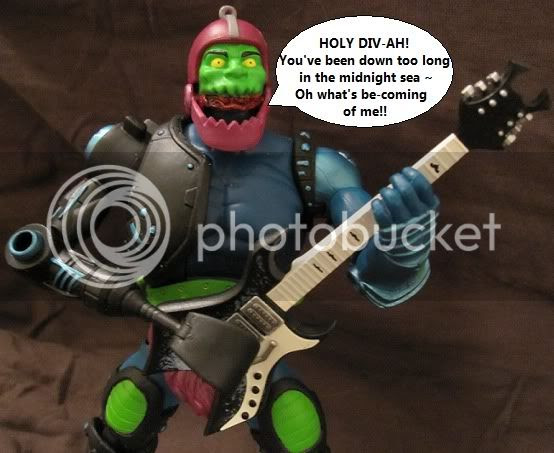 Well...not like that, but you know what I mean.

Oh hell, no I totally mean it like that. 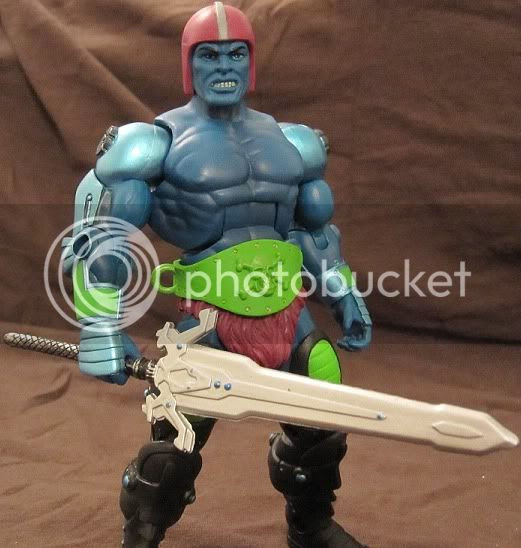 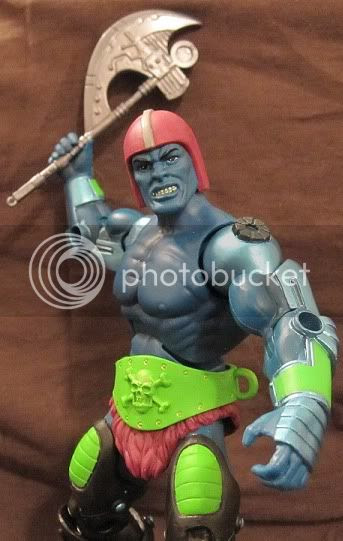 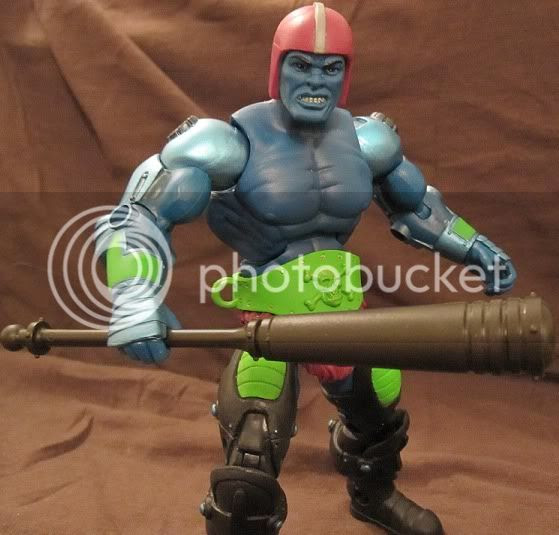 Oh man, what is this?  Christmas?  That's right, you get Kronis parts in the same package!  You can make him into his sneering visage before he got Skeletor's Jaw Buster Special to the face.  Above I was trying to give him some different ideas for weapons.  The top two are a sword from Ares (DC Universe) and an axe from the 200X Grayskull weapons.  Final one is a club (my favorite) from a toyline called Xevoz, which I will talk about in a future blog post because they're the most awesome toys you probably (and sadly) never heard of. 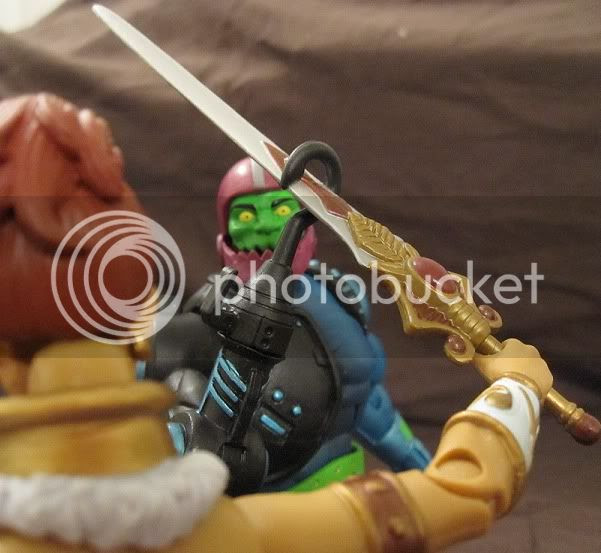 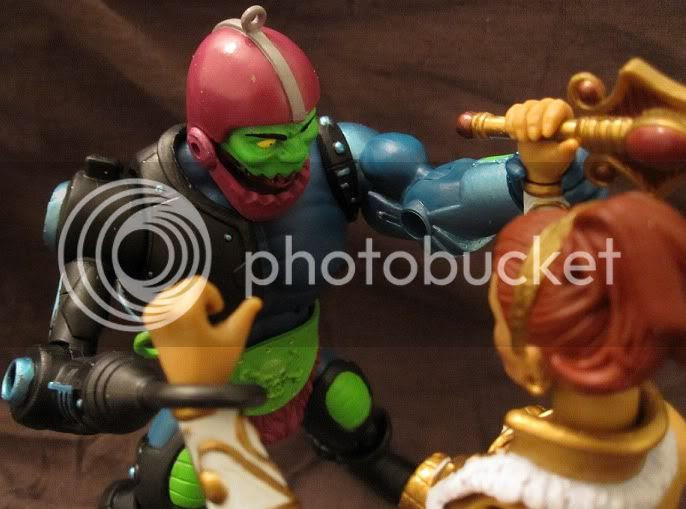 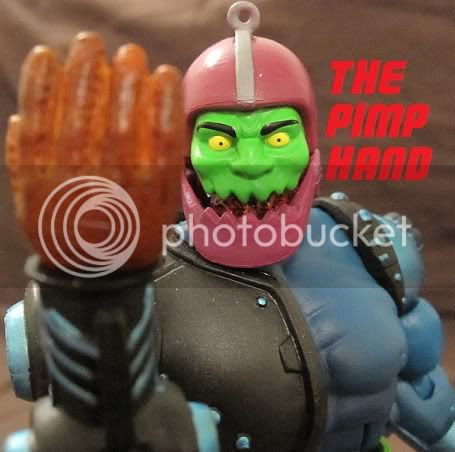 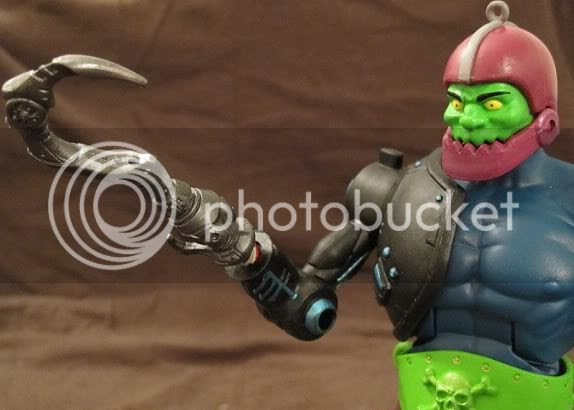 Yeah, the 200X Trap-Jaw hook doesn't actually fit in there; I just shoved something in with it to get it to stay.﻿ 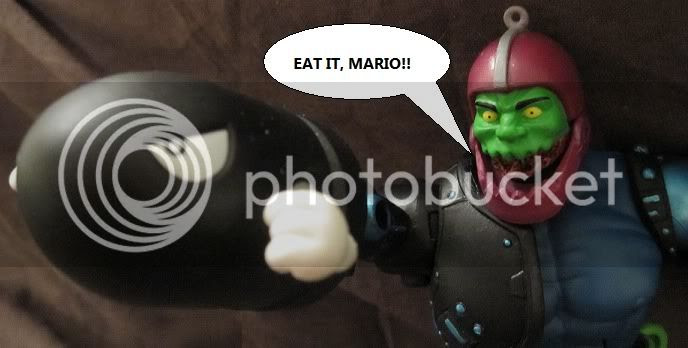 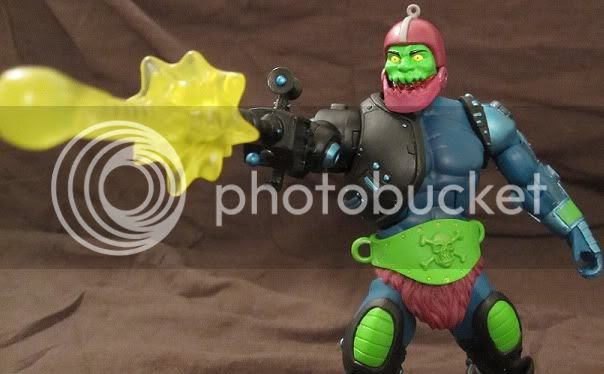 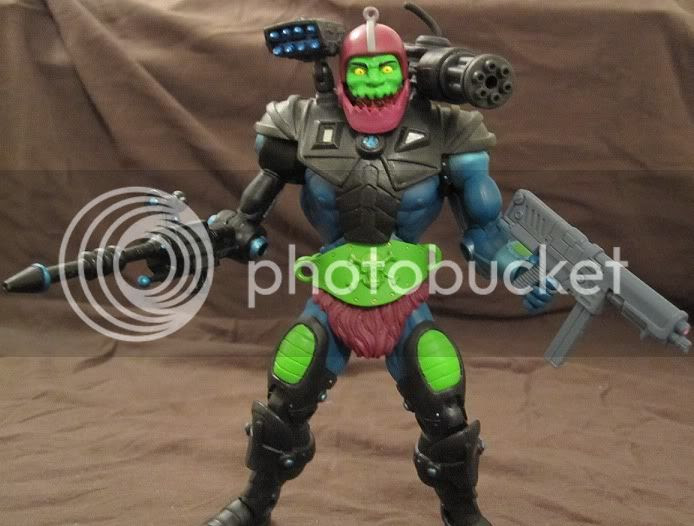 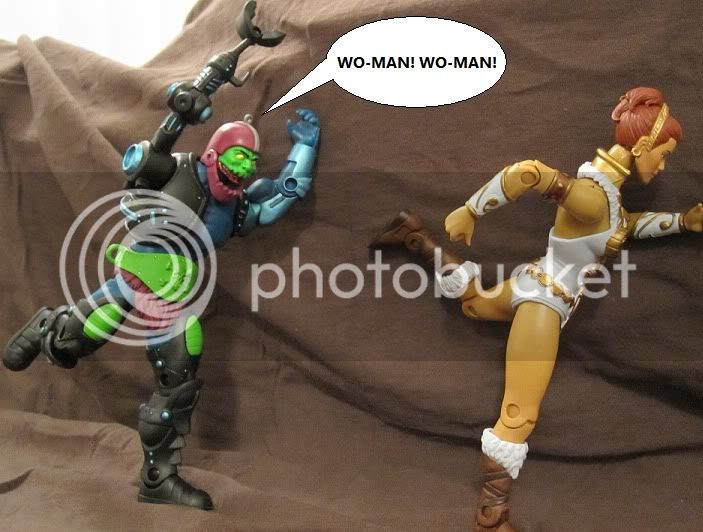 Last pic there was for a friend at He-Man.org (Big Country, possibly?) 'cause he mentioned that something was reminding him of Animal.  From the Muppets.  Duh.

Anyway, long story short: Get Trap-Jaw however you can.
Posted by Alexx at 1:31 PM