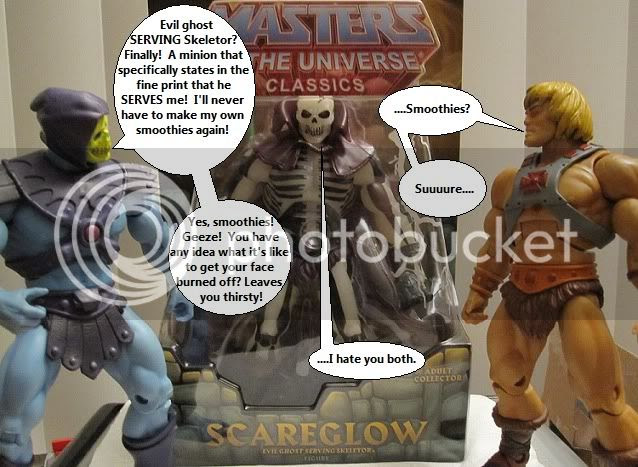 If it wasn't obvious, Scareglow was a figure near the end of the vintage line that was just a quick repaint with minimal new parts so they had a MotU presence at the stores without spending much.  A cheap repaint, I guess.


PFFFFT.  Yeah right; this guy is AWESOME.  I mean yeah, it's true that he was a quick 'n easy figure, but it is such an awesome idea.  He covers a lot of bases: he's a skeleton (awesome), glows in the dark (awesome), and is also technically not a skeleton because there are just bones obviously painted on his body (cheesy awesome).  There is just so much to love about this figure, and the MotUC version made him ten times better in all aspects.  He gets the same idea across because he's still a normal body painted up to look like a skeleton, but then his head sculpt is just MINDBLOWING, and they decided to give him a little extra flair with a new accessory.﻿ 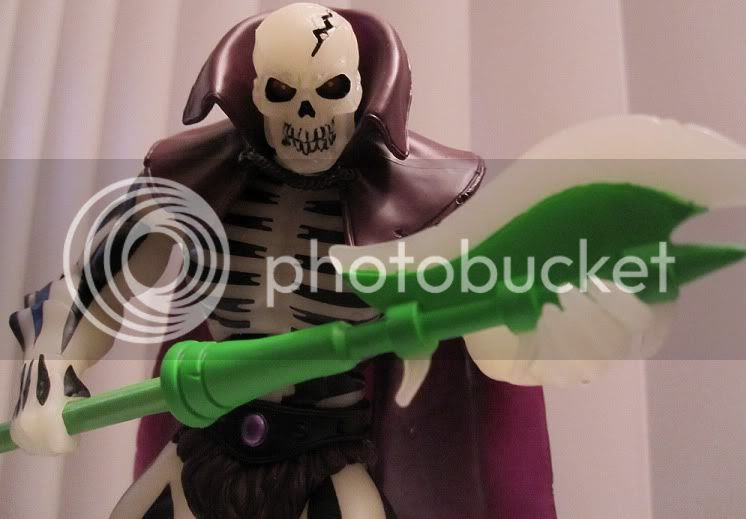 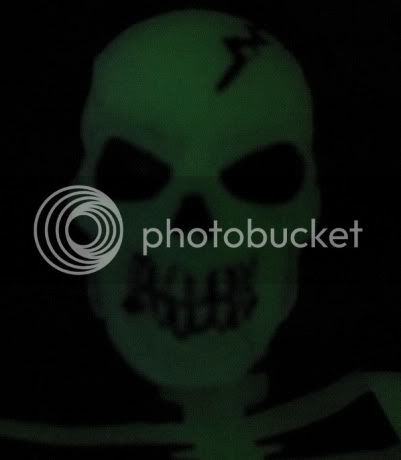 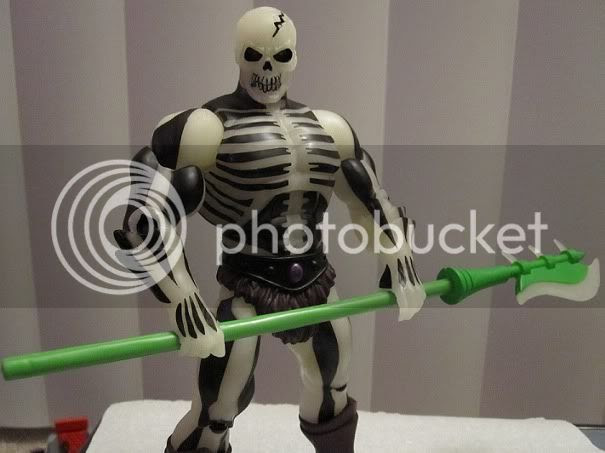 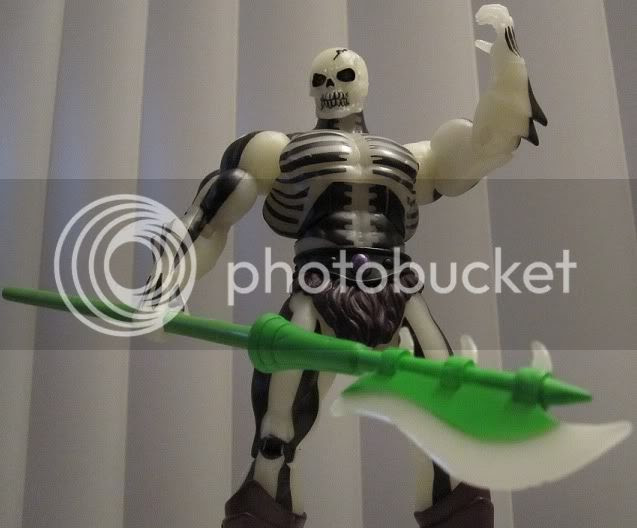 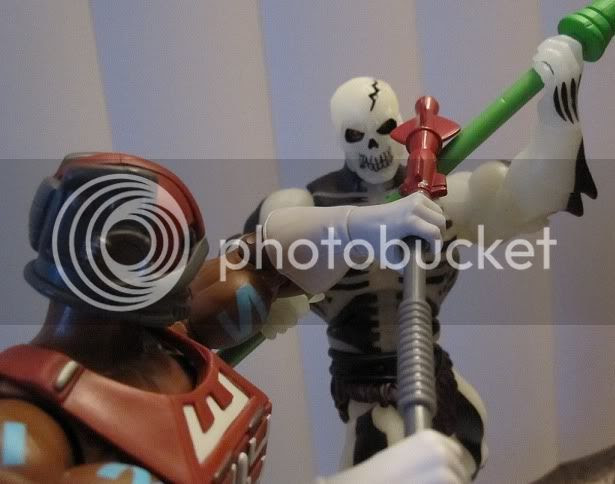 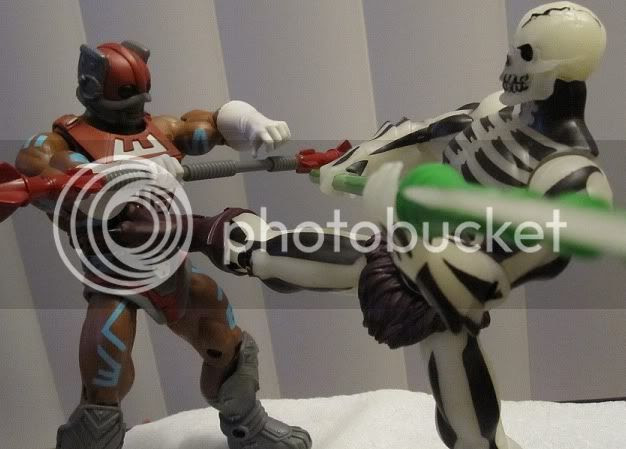 The new accessory is a reliquary that is chained to his wrist.  The top of the reliquary is a little sculpture of Castle Grayskull, and it pops off!  Inside the reliquary is the key to Grayskull!  The whole thing here is that his new background "fleshes" him out a bit.  The original story was just...well Skeletor summoned him from another dimension.  *YAWN* So they spiced it up by making him a thief (when he was alive) that was constantly trying to get into Castle Grayskull.  I suppose somewhere along the way he died trying, and was punished to walk the earth as a wraith that will always carry the key to Grayskull...however, he can't get it out of the reliquary!  What a cool background, and way more interesting than the way they originally shoved him into the story.﻿ 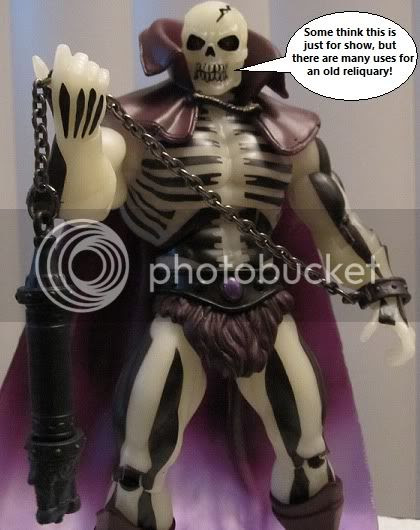 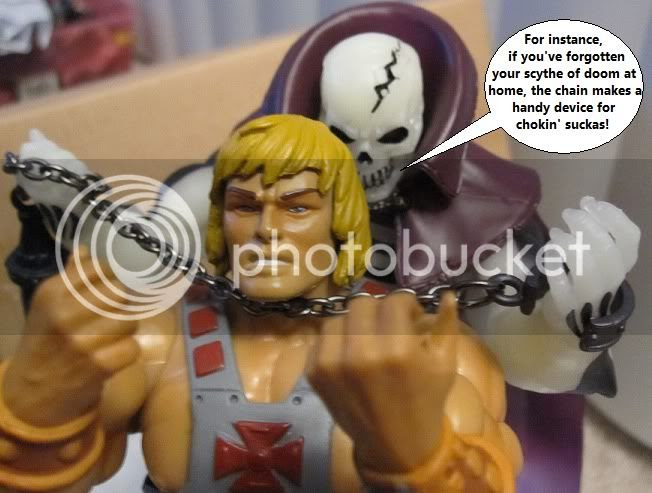 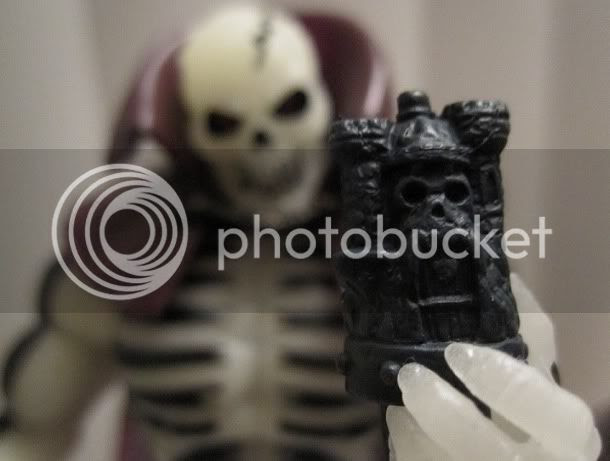 That little Grayskull on top is just awesome; one of my favorite details.  A perfect way to make this guy even more awesome than he already was.﻿ 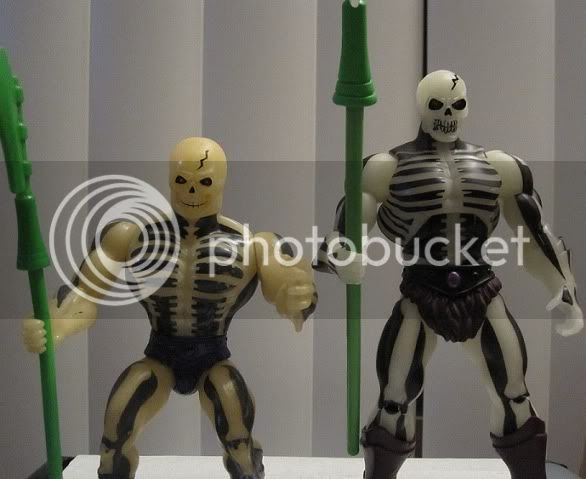 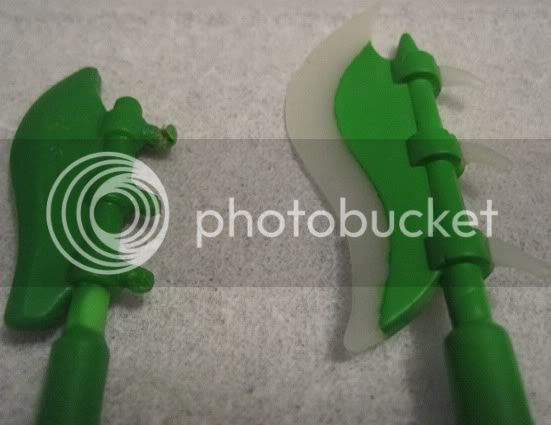 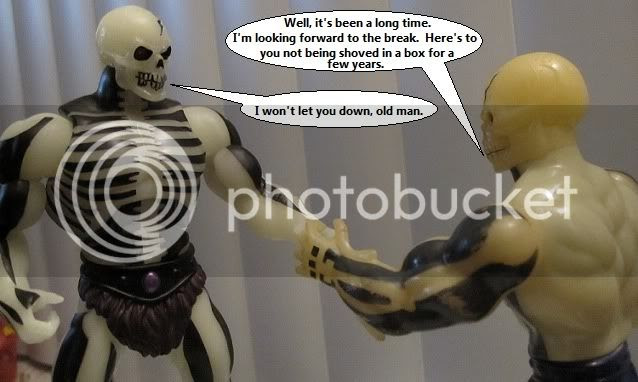 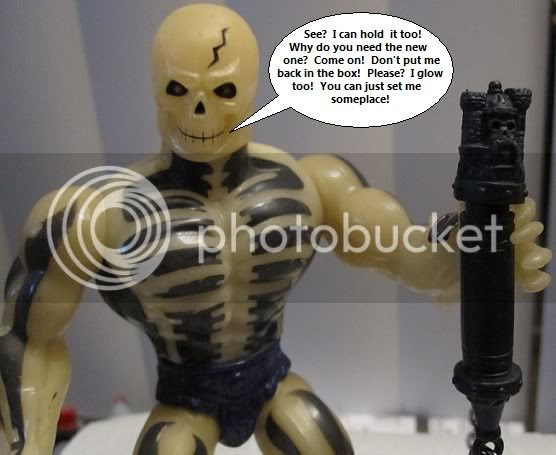 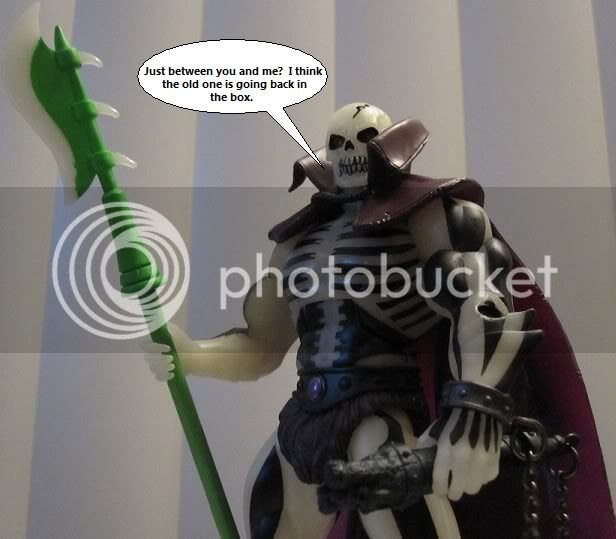 There he is with the vintage guy; you can see the head gained a LOT of detail while keeping the same idea.  My vintage figure has also yellowed considerably, which I hope doesn't happen to the new one.  Also you'll see that the left arm on my vintage figure is always up...yeah, that's glued on there like that.  Somewhere along the way he got tossed across a room (can't remember why) and his arm peg broke off, so I fixed 'em up.  Had to!  Can't let one of my favorites stay broken like that.﻿ 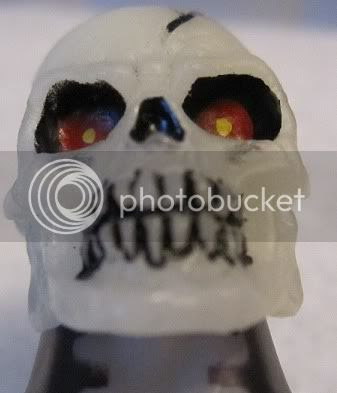 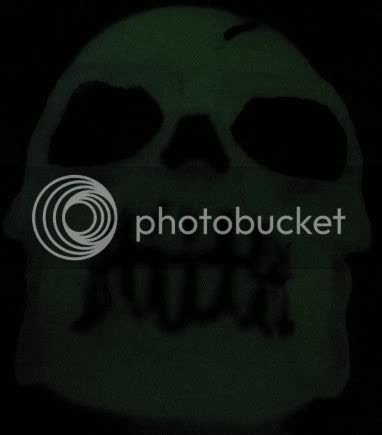 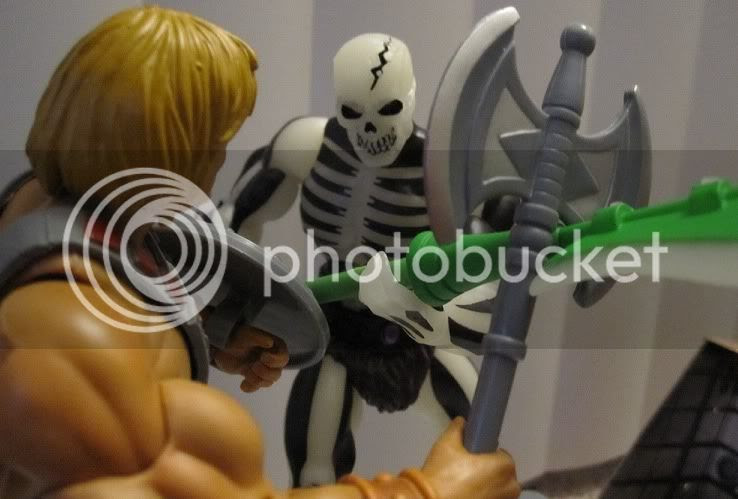 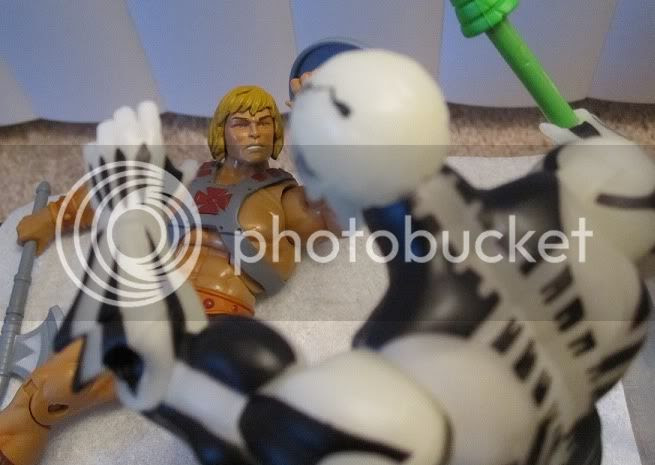 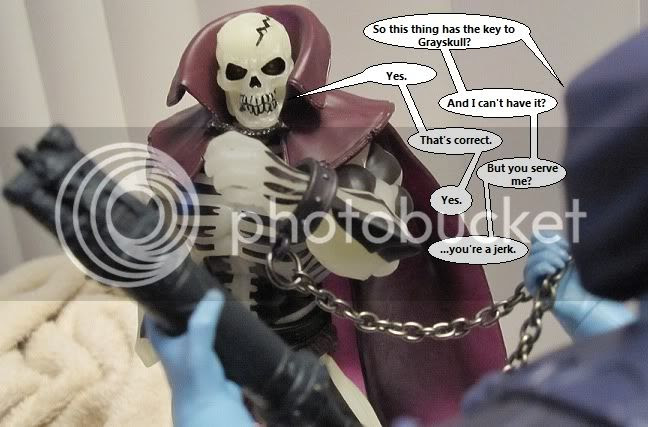 This one is my absolute top favorite in the line, and he stays on my bedside table at all times, glowing into the night.  I couldn't have asked for a better rendition of Scareglow, and the sucker even almost came in my birth month!  The original idea was to bring him out in October for Halloween.  I was born on October 8th, so that would have put my absolute top favorite right in my month of birth, but setbacks for other figures pushed him forward to November.  Still...it's the thought that counts.  He was going to be there, so I still consider him to be an awesome birthday present from Mattel.﻿ 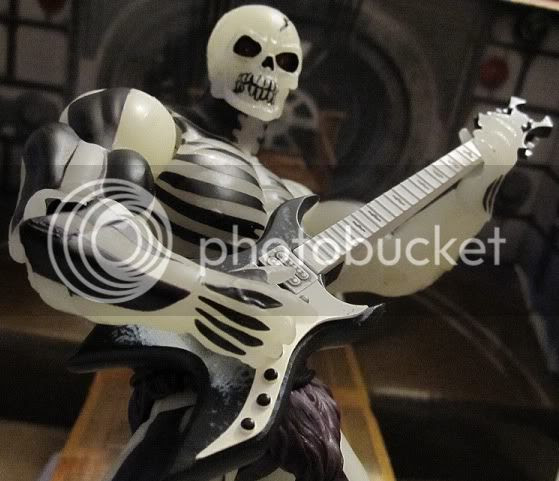 Best figure ever.
Posted by Alexx at 4:21 PM