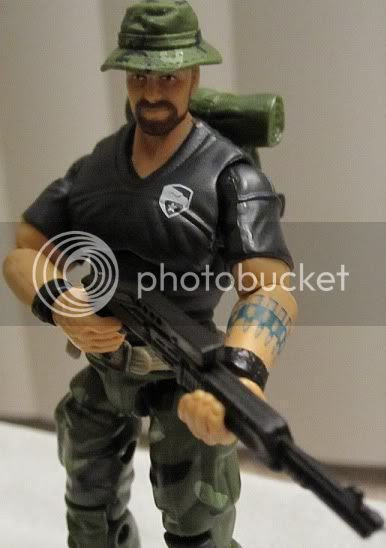 
Ah yes, one of my old favorites!


I've been scouring TRU more often than normal recently, since they're the only ones who thought far enough ahead to only get a normal amount of wave one so they could move on and continue selling toys (as opposed to Target, who got the other waves, but instead decided to order some crazy amount of the first after they had already stocked so much of it before the movie came out).

So here I am with Bench Press and nothing else, because I'm just not checking enough, I guess. I haven't lost, however, 'cause Bench Press is pretty awesome for a repainted Bazooka with a Clutch head and Heavy Duty legs. Heck, I didn't even know he had Clutch's head until I had him in hand; it works perfectly for this character and body. Part of what makes him so awesome, though, is his accessories. 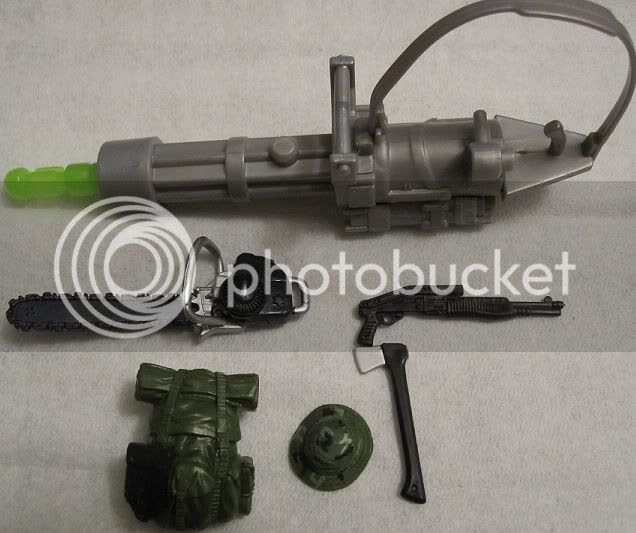 Pretty normal layout.  I mean, we've gotten all this stuff elsewhere already. We got two hatchets with the red Neo-Viper, the chainsaw with Ripper, and the shotgun - OY - you should have enough of those from Spytroops. The giant mini gun (har har har) is also a repeat, from Heavy Duty.

Take a look at the layout, though. Yes, it's good stuff and more good stuff is always appreciated, but look at what they chose to give this guy: There's a hatchet AND a chainsaw in there. What does he need with those things? 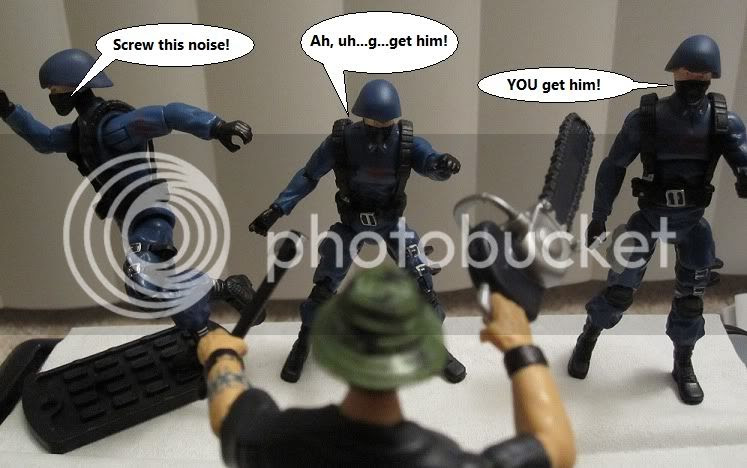 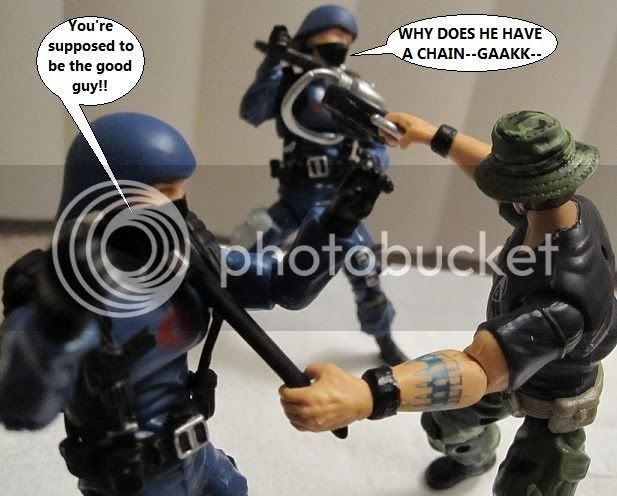 I've come to the conclusion that Bench Press is G.I. Joe's resident murder specialist, and have changed his filecard accordingly. 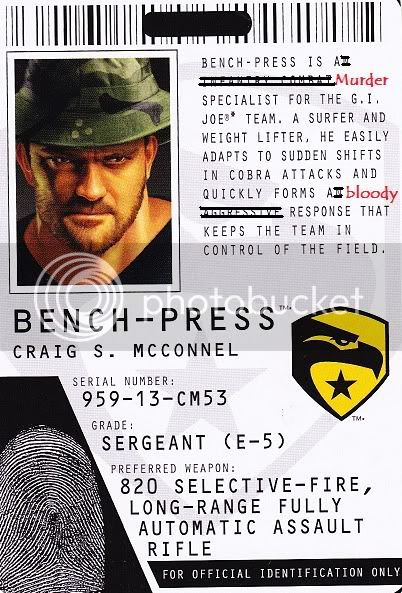 'Cause this guy ain't no lumberjack! Thems is killin' tools! 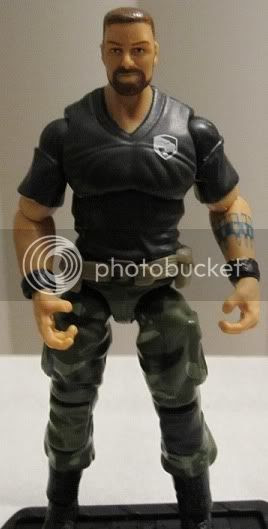 As usual, it's the little details that make someone unique. Bench Press here is sporting a mean ammo belt tat! 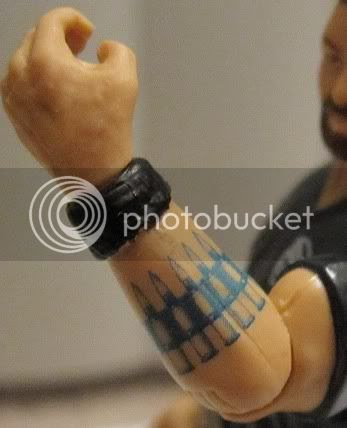 Also, for some reason, they carried over Heavy Duty's one black knee pad: 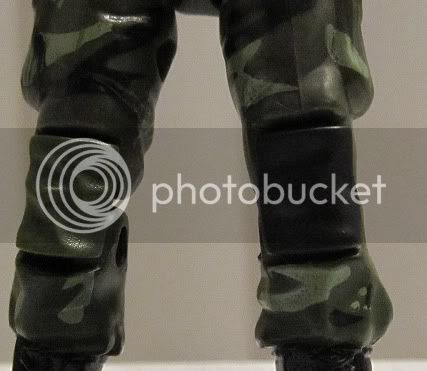 I would assume that would be a unique thing, but perhaps it's a military thing, who knows?

Anyway, like I said, this guy uses Clutch's head. 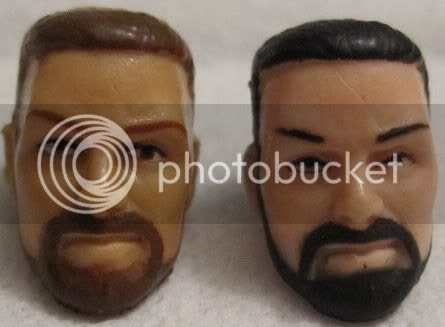 Pretty similar when you've got 'em together, but since the body is so huge, they can easily be different people when pictured together! Otherwise, he's using Bazooka's body. 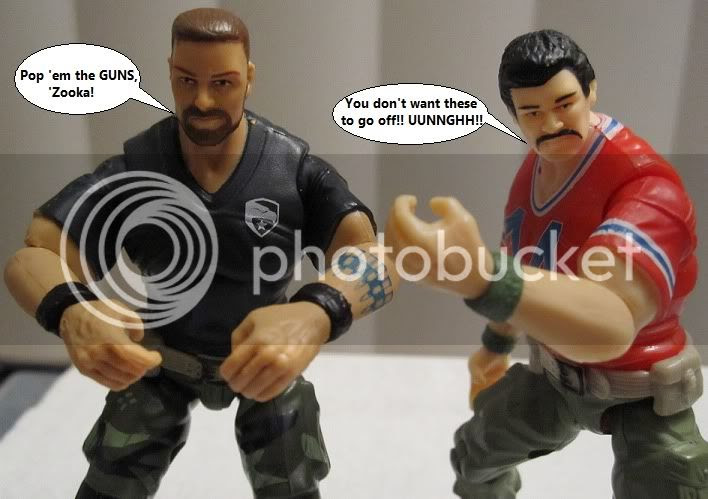 So Bench Press is very imposing! Something about the face helps that a lot, but as I said, the weapon layout just makes this guy seem crazy! Though, of course, it's hard to use that mini gun. I can make way for the others, 'cause they mostly aren't real....but that's just a comicaly giant version of a mini gun. 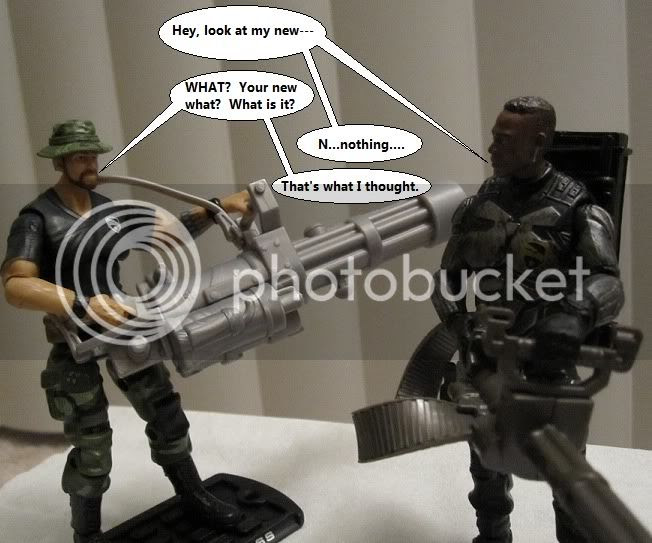 I expect that thing just fires out armed infantry. The chainsaw though...man, that's the one that gets me. He's the only Joe to act like a Dreadnok! 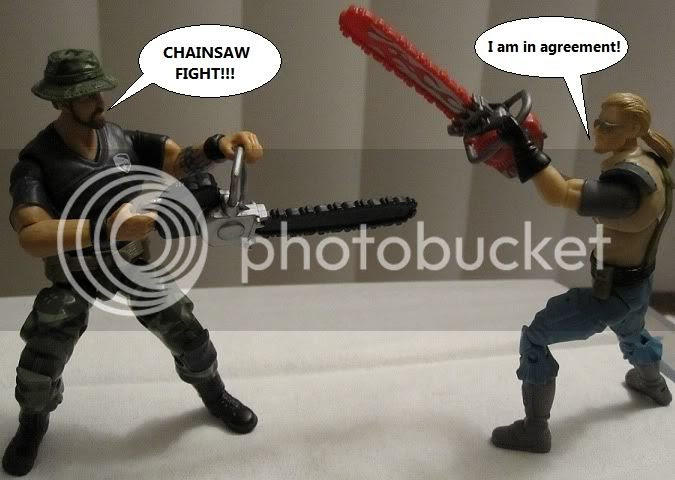 That's why (though I'm sure he's supposed to be calm and collected) this guy is the Joe's main master of Crazy. Being as huge as he is, he can pull it off! Even without the weapons, Bench Press can still pull out the GUNS. 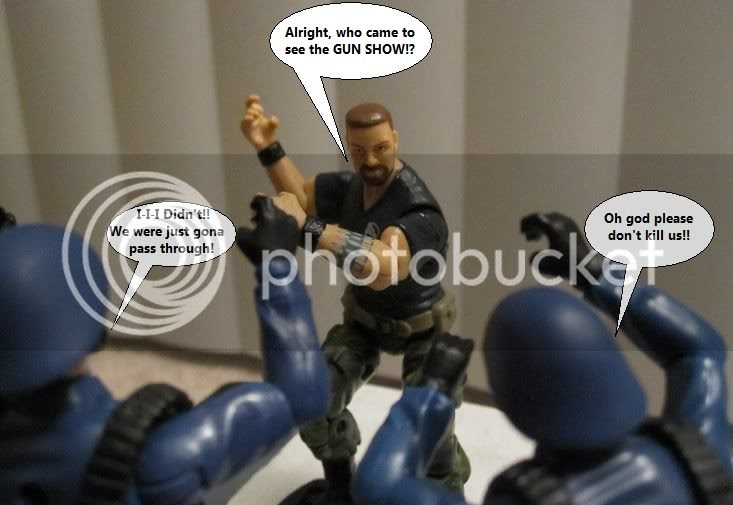 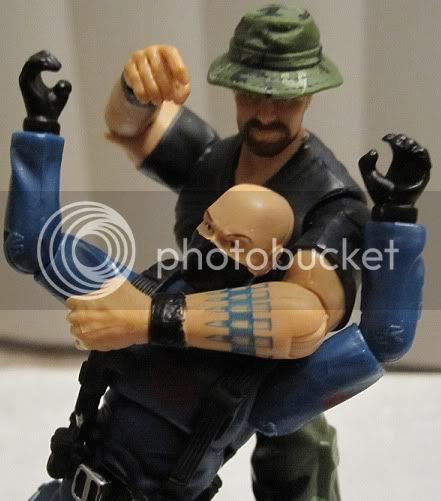 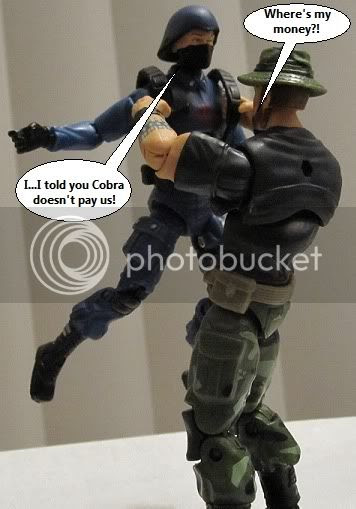 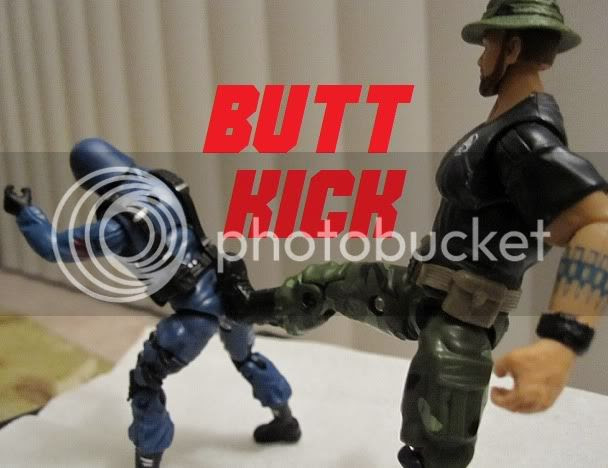 So why not go out there and pick yourself up a Bench Press? Can you see any reasons not to? If so, ignore them and spend the money anyway.

Oh yeah, this guy is still totally viable for your collection, if you don't have him.  The chest joint is obvious and ugly, but that stuff never bothered me much, and there aren't many figures with larger bodies like this, so he's a unique individual.  No reason not to flesh out your big-dude ranks, and this is top-tier in terms of big dudes!  I know Joe fans might go for the classic guys like Bazooka, but this one still stands out to me.  He's huge, imposing, uses a chainsaw, and I think he may have been a sort of reference to Rock 'n Roll without actually being him, so you can't really go wrong with this guy.

If you have any sort of Joe collection still, I'd consider picking this dude up.  He's still awesome and stands out as one of my favorites from Rise of Cobra, and that's saying something, considering that most of my favorites aren't regular-looking dudes.  He'll always be my Joe's regular Murder Specialist.
Posted by Alexx at 2:17 PM