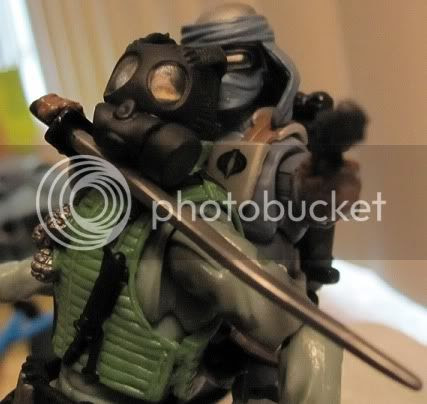 
Look out for the Shockblast, it's like a Shockwave, but with an explosion after the shockwave of the explosion:

Yeah, the package says Shockblast. Anyone care? Didn't think so.

So this is the Wal-Mart exclusive Shockwave VS Night Creeper pack! I bought two of them and decided to leave the others. They looked fine and all, but I gotta cut costs somewhere, and this pack is a wonderful army building set! Since I haven't seen these at all, and had to rely on a very helpful tip from SE1975 (from Joebattlelines), I figured I'd get these now just in case the Wal-Marts around me decide to do one of those stock 'n forgets (where they stock it once and leave it at that).

So I guess I should warn you that this is one of those sets that I LOVE, so I'm gona be gushing. Regardless, there's a special flaw in Shockwave that I'm sure you'll be tired of by the time this review is over. You're welcome.

Lets start with the Night Creeper! 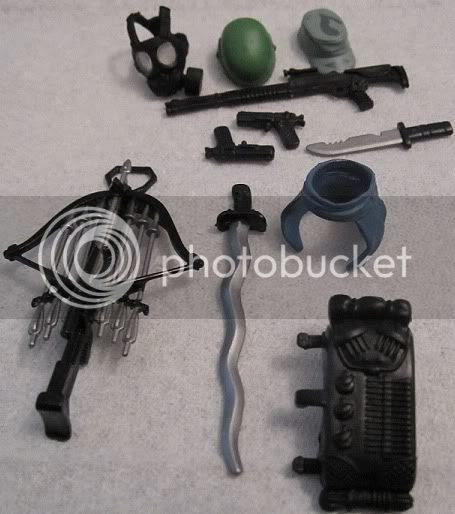 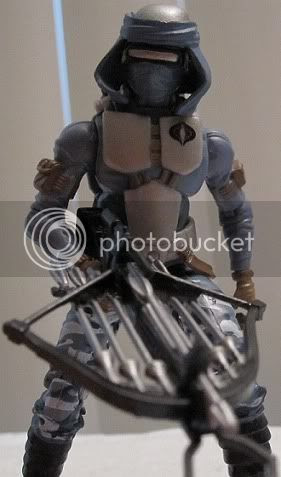 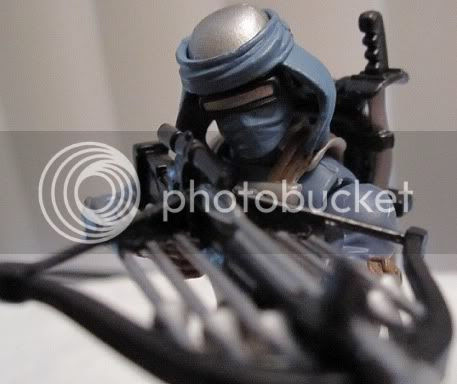 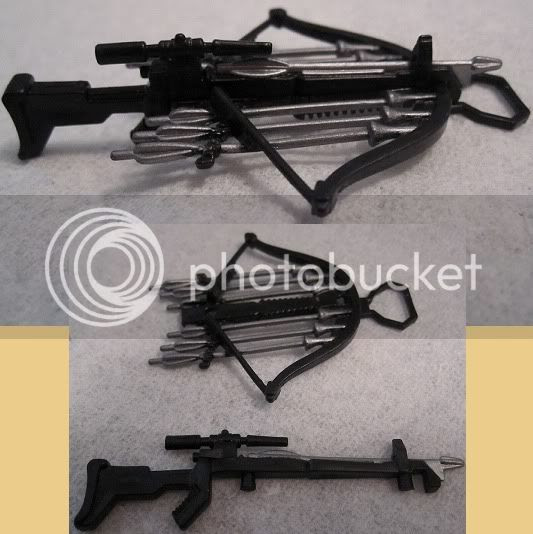 Comes in two parts, as you can see. Here's some other little details: The hood comes off this time around, showing a metal helmet underneath. 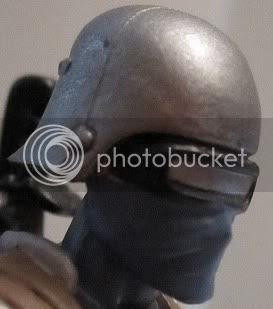 Looks cool, makes for easy customs with a really cool head! Next, his shoes are spikey! 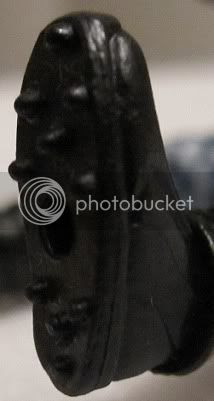 Now, the figure itself seems to be taking it's color scheme from the past TRU Cobra Urban 6-pack Night Creeper. 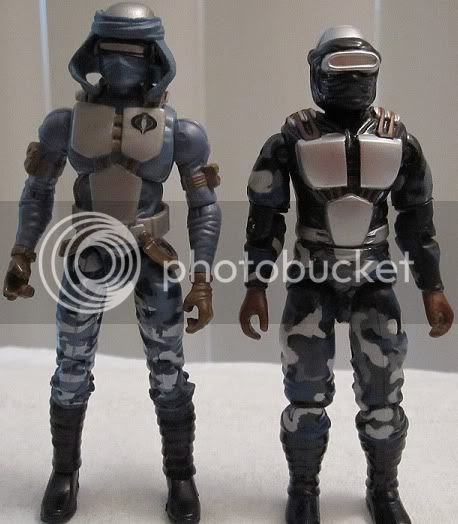 Not exact, but pretty similar. More importantly: BETTER. This, of course, is my personal opinion. I do like the original color scheme, and it would have been cool to get it, but I didn't want to spend the cash on the 7 pack when I mostly wanted this guy and the Alley Viper....and this guy, the Night Creeper, had Shipwreck arms in the 7 pack! Why? Hard to say. I guess they thought the upper arms were separate sleeves on the original, so they had to mimic that. Sadly, the process gave him hands that aren't as useful as the ones here! On this particular figure, we get the old Snake Eyes hands from the very first 25th SE figure! Those hands (and arms) are fantastic and hold just about anything! So that, in turn, makes this figure awesome!  Lets take a look, shall we? 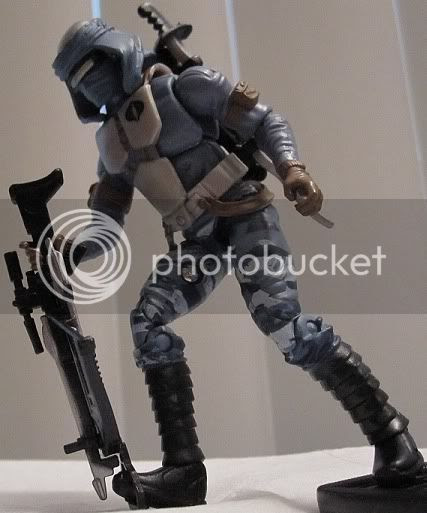 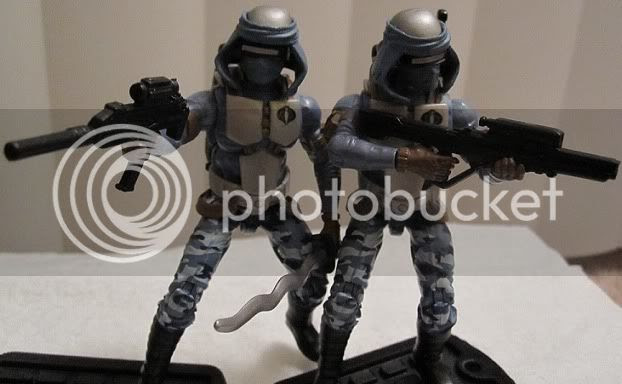 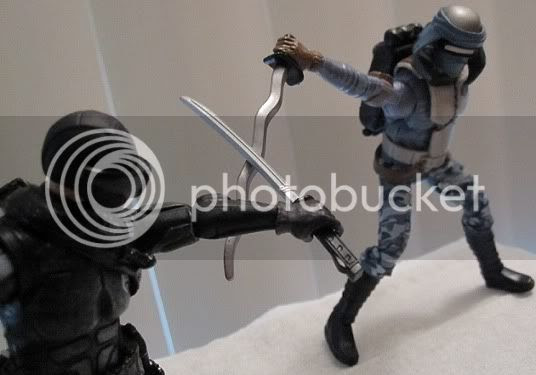 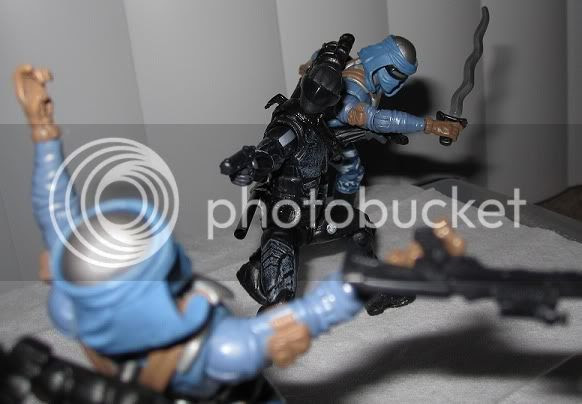 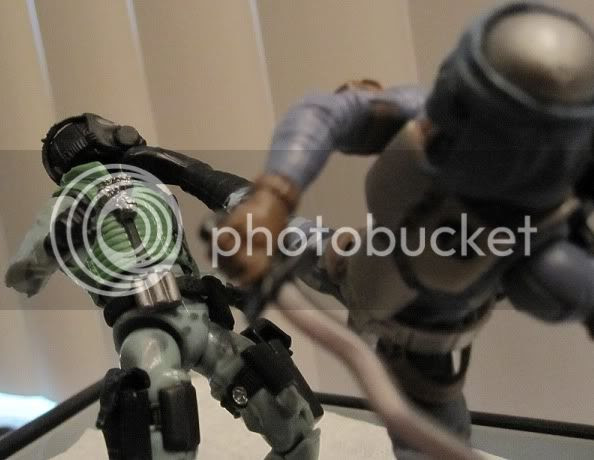 SO glad I got two of these! As you can see, he can perform a number of acrobatic ninja stuff and look cool while doing it! For me, this more than covers the cost of the pack! Now, though, for folks who aren't crazy like me, I'll take a look at what else you're paying for.

As seen above, Shockwave comes with the same stuff he came with in his original comic pack. This is a GREAT thing, because he comes with that awesome gasmask, but also the hat and the helmet. With those items and two of these packs, you've got instant greenshirts! He's green, too!

There's just one problem. The comic pack Shockwave had this problem, but it wasn't as bad as it is here.... 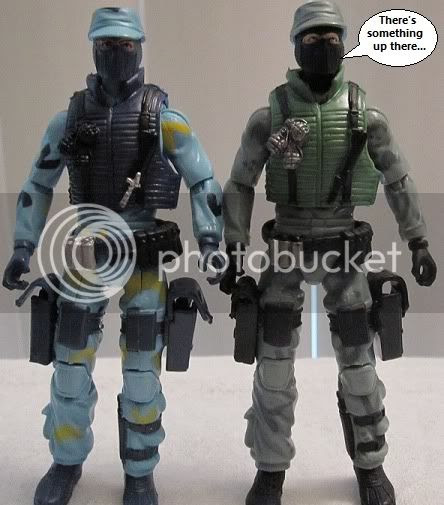 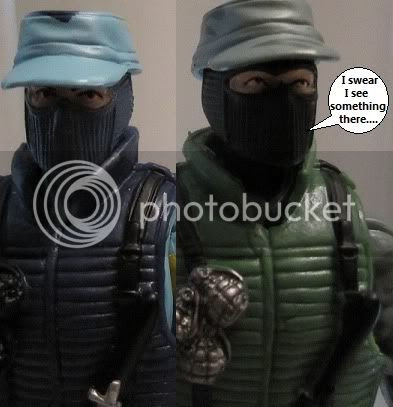 He's looking up. He's always looking up. Shockwave had this problem before, since his head was always tilted up, but his eyes were at least painted on straight! This one not only looks up with his head, but his eyes are also looking up! All the time! 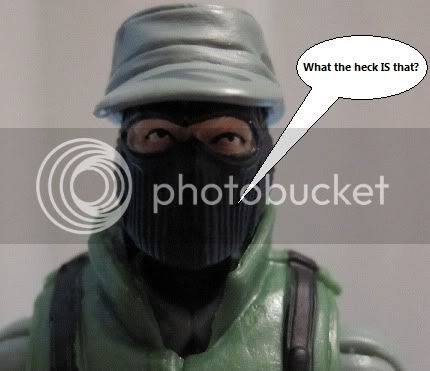 This is a problem, because these guys should make perfect troops! They're just always looking up... 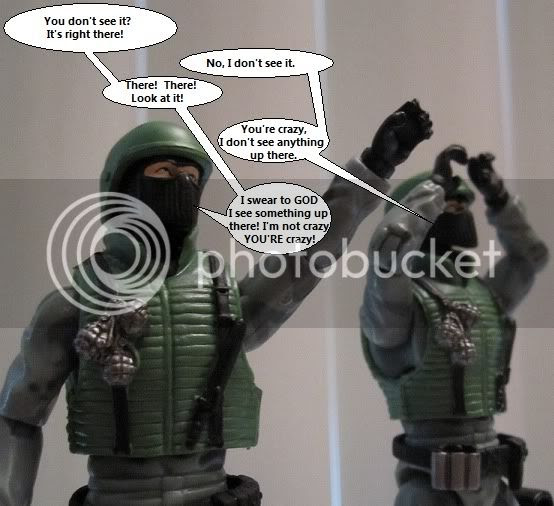 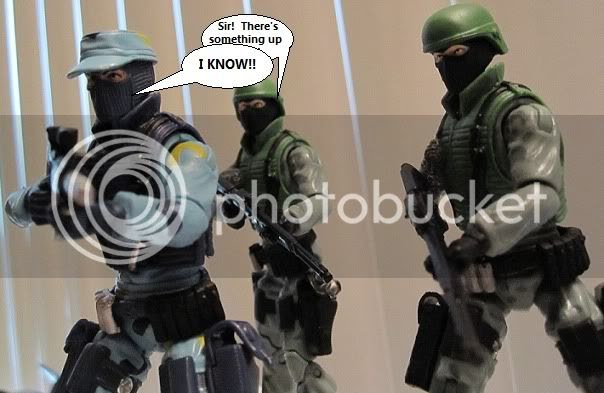 There is one remedy though! Put those gasmasks on! 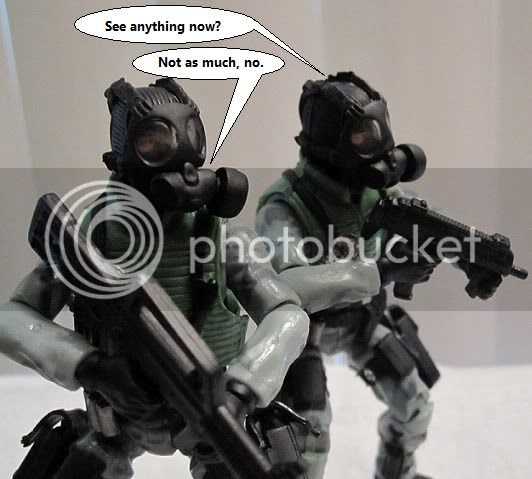 Not only do they look cool, but you can't see the eyes as badly! As for the head tilted upward, I fixed that on the first Shockwave by cutting the inside of the head near the front with a hobby knife. I didn't do the best job, but it's possible to get rid of that. The gasmasks are the only way to fix the eyes, though, without paint! I don't mind terribly, though, because these guys make great buds for Shockwave! 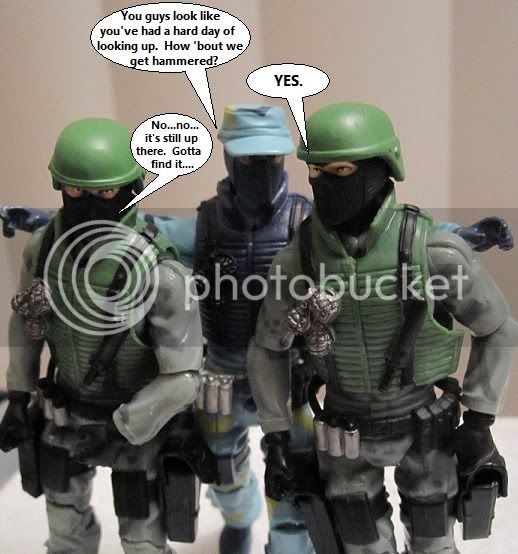 So, personally, I think this is the best set out of the three! I'm not sure what to do with or how to use the other two, since they just portray whoever they are, but this set can get you a Night Creeper per buy, and a great standard green trooper for urban situations or otherwise! With the extra gear, you can also outfit them differently! So while you can buy one of each, I'd just get a few of these. Great set!

Oh, almost forgot: You also get two stickers and a tattoo! 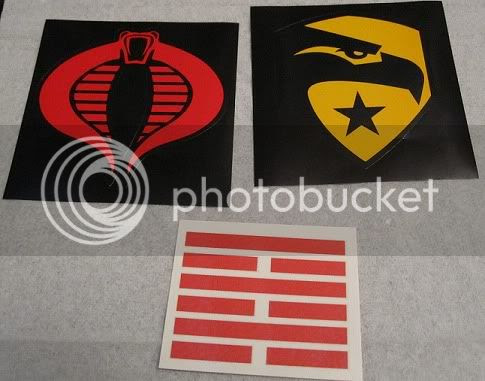 THAT seals the deal!

Shockwave, on the other hand, has been rendered moot, at this point.  He's not that great of a mold, he's useless as an army builder (because of the Joe Troopers and Steel Brigade), and Past Alexx neglected to point out that he uses 25th Cobra Trooper arms and hands, which SUUUUCK.  I think I just dealt with it, back then, because it was what we had.  Nowadays they're just terrible and you don't need to put up with them.

Like I said, though: It was nice for the time!  And hell, the two Shockwaves ended up being pretty good parts, eventually (not that they're good by today's standards).  I don't regret buying the pack, because the Night Creepers are definitely here to stay, even if I get rid of most of my Joes.  Plus: STICKERS AND TATTOOS, PEOPLE!  Slap those babies ON!
Posted by Alexx at 6:57 PM