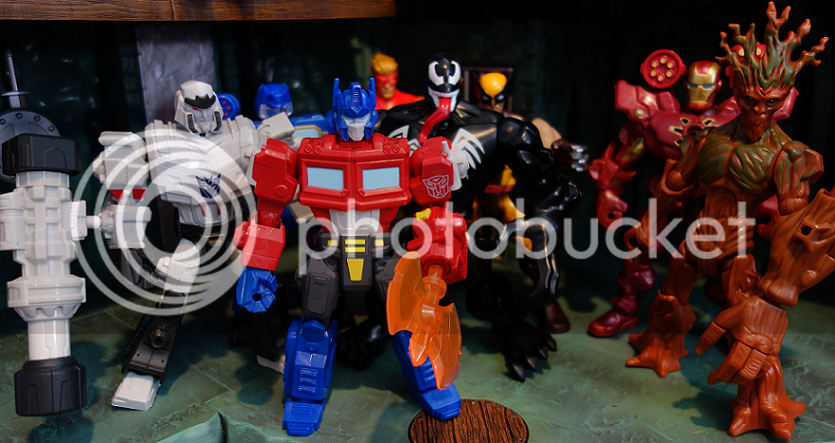 HEY, you there!  You look like a smart fellow who likes a good mash!  Why not step inside and have a look around?

Hasbro took a classic theme of mixing, added some crazy proportions, and then did the sensible and genius thing and added nearly ALL their biggest properties to the concoction.  It started with Marvel Superheroes, moved on to Transformers, stomped all over Jurassic World to add some dino parts, and will soon be adding Star Wars, just in case they were afraid the cash pile wouldn't be cushy enough to sleep on.  It's like Katamari Damacy, but the only thing you're picking up is body parts and big-money franchises.

I've been sitting on these things since they came out and had planned on a big post about it, but I feel like the main event is the Mashing itself, rather than a deep look into the toys.  So, to keep things nice and easy while I work on other things, here's a list of the crazy junk I've mashed so far. 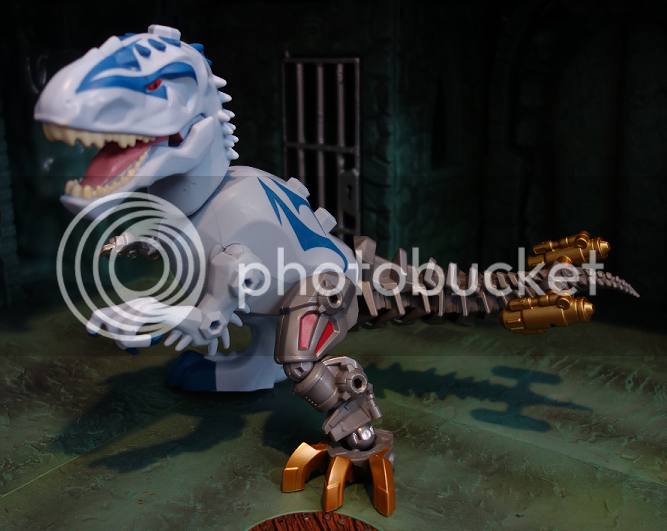 First thing is something from a previous Schwag Brag: the Indominus Rex from Jurassic World mixed with Grimlock parts and two little blasters from Soundwave.  I badly needed a cyborg dinosaur, so here it is! 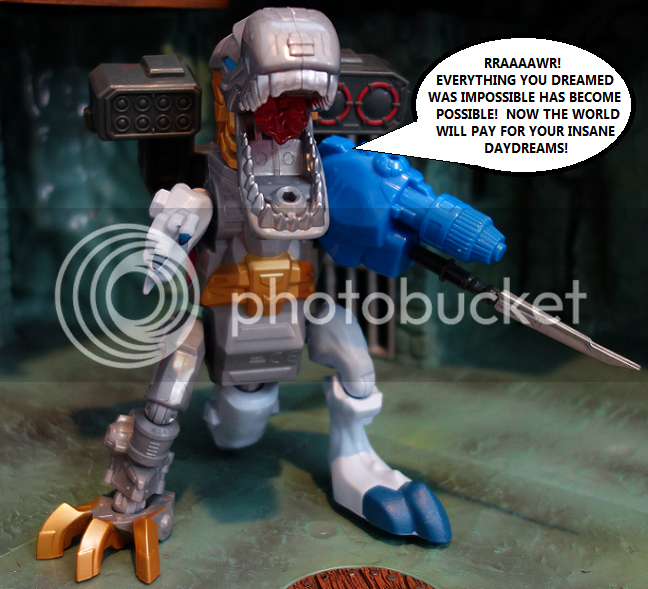 ...the extra parts went to this, plus a missile pack from Bulkhead, a gun arm from Optimus, and a knife from Drift.  I call it the SERIOUS REX. Dr. Doom was one of the earliest ones I bought, and I kinda sat on him, waiting for interesting parts to use with him.  The problem with JUST the Hero Mashers was that I wasn't terribly interested in mixing Heroes with other Heroes.  Some of the parts looked non-descript, but many are very obvious parts from known Heroes and villains.  Adding Transformers to the mix was perfect!  Now I had robot parts!

In comes Bulkhead (who was on clearance).  Green parts for the green Doom!  He's using Bulkhead's arms and legs with two different Optimus parts:  The gun is from the mid-level Optimus, and the energy hand is from the deluxe Optimus. 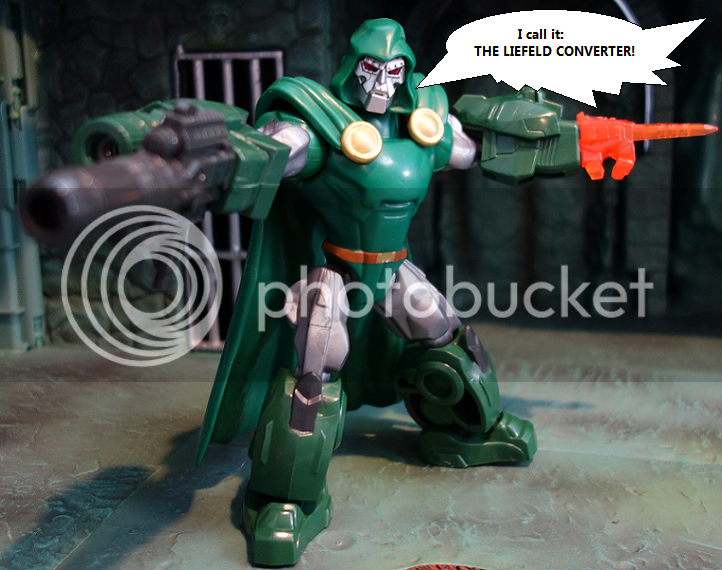 For me, there isn't any point to keeping these guys in their original states.  I made it a mission to create the most ridiculous versions of my old favorites in ways that I kinda did back when I was a kid.  I would always be adding things to my toys - cocktail swords, bright rubber bands for energy gauntlets, other accessories from across the board.  These Mashers are like a make-your-own-90's-toybiz-variant machine, and I'm in love. 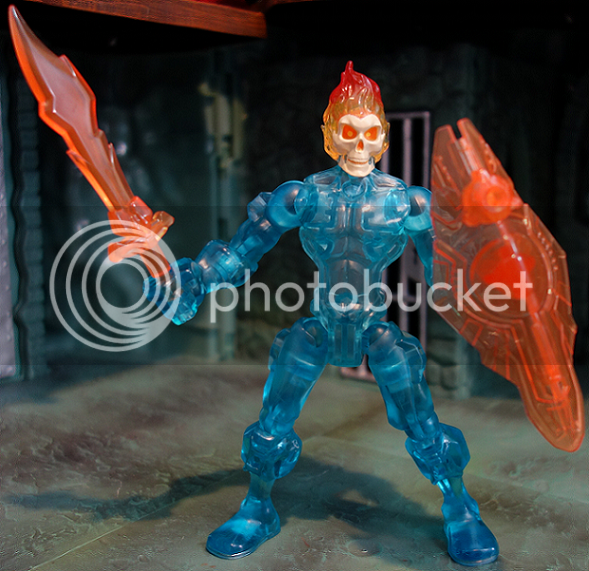 That's right: Iceman, Ghost Rider head, and weapons from deluxe Optimus.  It's contradictory ghost!  This is what I'm talkin' about, and why these Mashers are so dangerous, much like any mixing toy line.  Anything you buy could be fuel for something else. 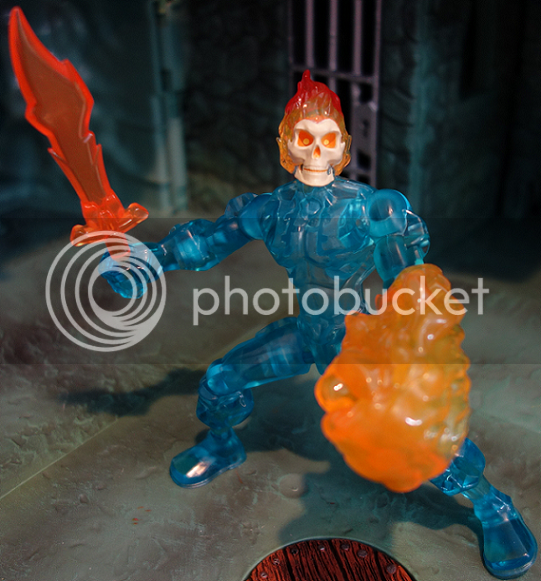 And just to load up on the fire, there's an arm from Pyro as well. 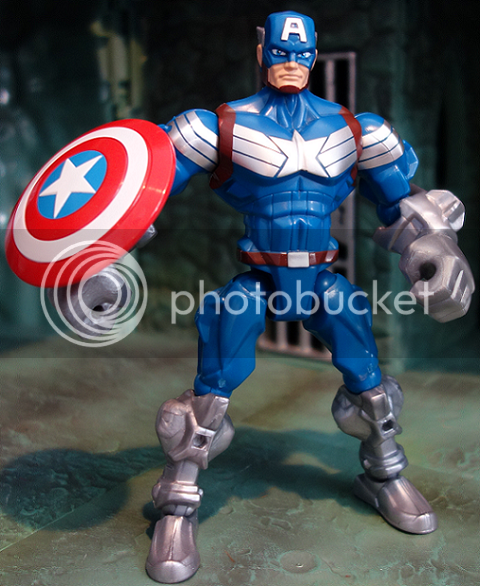 Dr. Doom's leftover arms and legs went to Captain American to make this armored versions (it matched his chest design).  The Cap himself is from this neat deluxe set that came with him and a bunch of random Avengers parts. 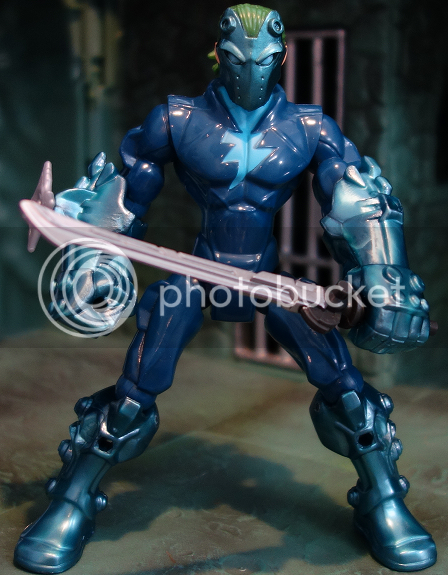 This one is a favorite!  His body is Electro, and the arms, legs, and head are from Whiplash (while the sword is from Drift and the throwing star is from Deadpool).  The colors just worked out really well.

Let me take this chance to point out a running change in the construction, though: The Mashers started out with outwardly moving shoulders on your standard disc, but Electro's body showed up with only front-and-back movement for the shoulders.  Some figures will use the old shoulders, so sometimes it's hard to tell which ones will have what.  Doesn't matter much, in the long run.  The shoulders are one of the few parts of Mashers that don't come out, so you can't mix those anyway.

It makes sense, honestly.  When these first came out, I was FLOORED by the cheap price compared to all the parts you get.  You can spend 20 bucks on one Marvel Legends figure, or 20 bucks for a deluxe Masher with one figure and LOTS of parts.  It's a steal!  Naturally, it IS a bit a steal, so you can see cost-cutting measures show up in the change with the shoulders and some parts that are hollow underneath. 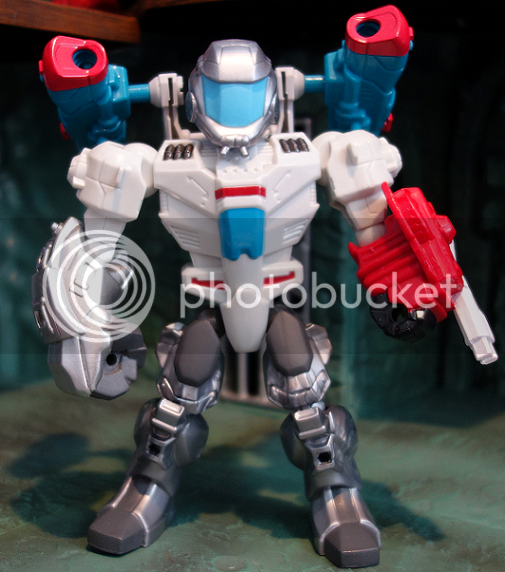 This beast was made possible with the help of Jetfire's body, a backpack from Megatron, guns from Grimlock, legs, and arm, and a helmet from deluxe Hulk (with Optimus' head underneath 'cause it fits), and a red arm from Soundwave's pack (for Sideswipe, I think).

The helmet is a first in the line, 'cause it's a helmet rather than a regular head.  The Hulk pack it came from is new, and features a Hulk with a crazy face and an action feature...and food items.  You'll see. 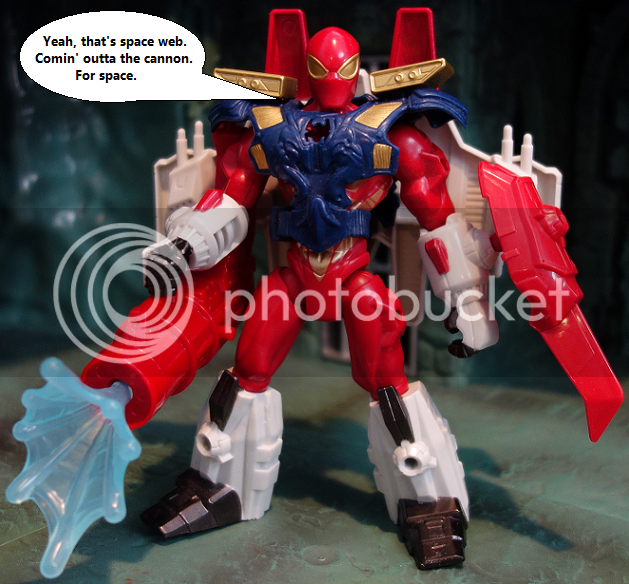 This one is themed after an Alexx Classic: Space Spider-Man!  I used to dress up my Spider-Man figure with some huge boots and a Robocop helmet and call it a space suit, so this sorta runs with that theme.  The boots are the only thing that carries over from the old days - everything else is just junk I figured would look space worthy.  Like the huge web cannon!  For, uh...fixing hull breeches.  In the ship. 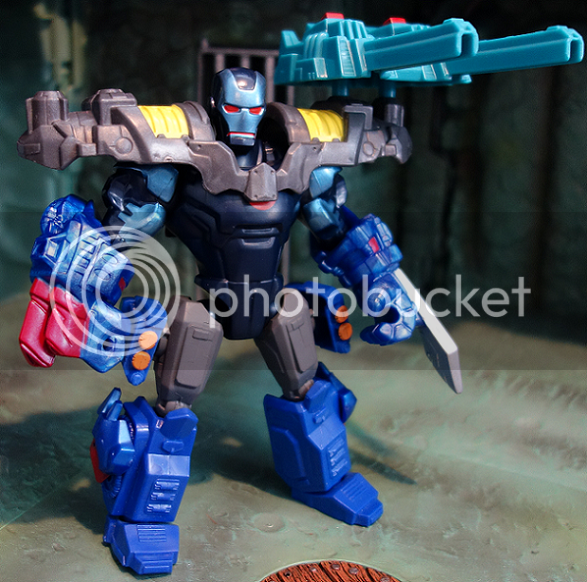 This one is an Iron Man body and head from the same pack as that Captain America above.  The arms come from a deluxe Iron man, legs and shoulders from deluxe Optimus, and the cannons from Grimlock (because he came with a friggin' TON of weapons). 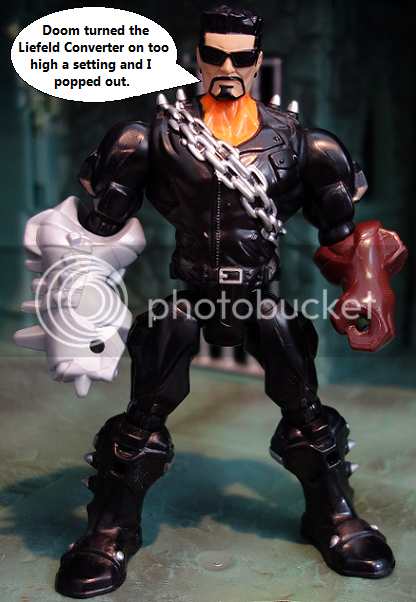 Ghost Rider body (if that wasn't obvious), Tony Stark head from deluxe Iron Man, brown arm from Captain America, and a Destroyer arm that came with Groot.  I call him Action Figure Hero, 'cause he looks like a dollar store toy. 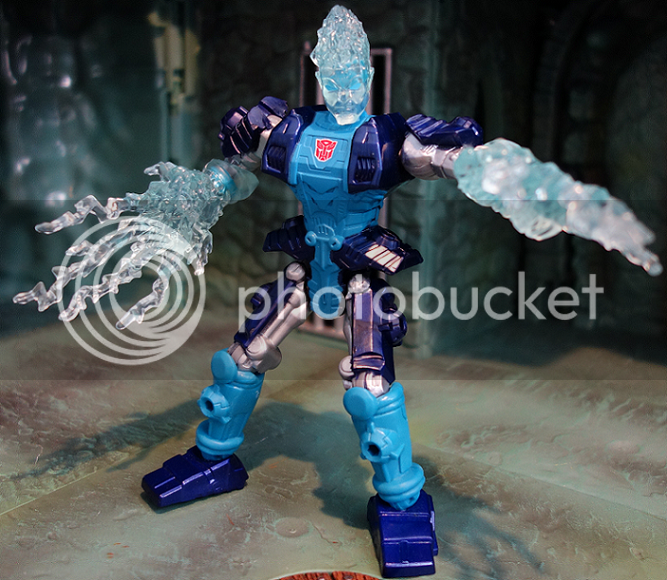 Drift body with Electro's arms and head.  Worked out well!  Drift has this creepy skeletal body and I thought this made for a decent creepy robot. 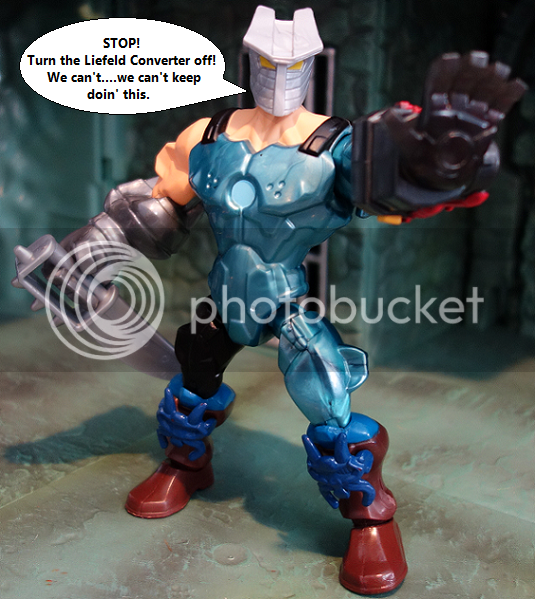 This is sorta "extra parts man", 'cause I dunno what I was thinking beyond "put parts here?"  It's a whiplash body and upper legs with Captain America lower legs, along with War Machine's left arm, and an armored Hulk right arm that also came packaged with Whiplash.  Oh!  And a Destroyer head from Groot's pack. 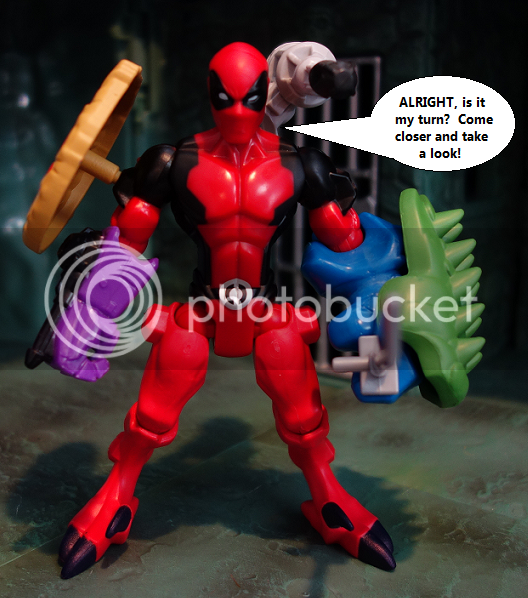 Out of all of them, I felt like Deadpool would be the one to use anything possible. 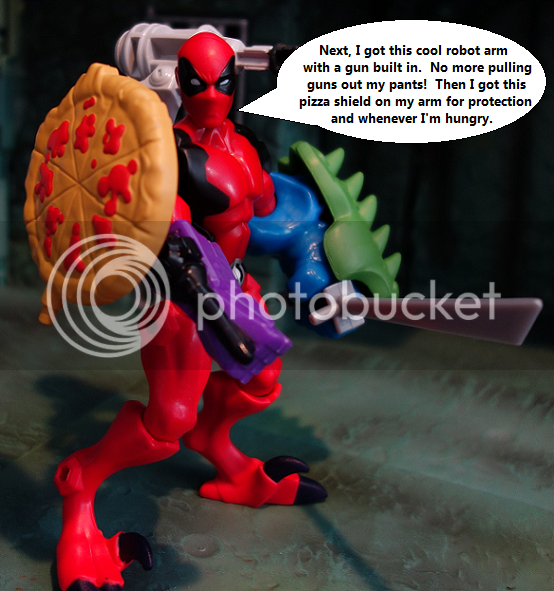 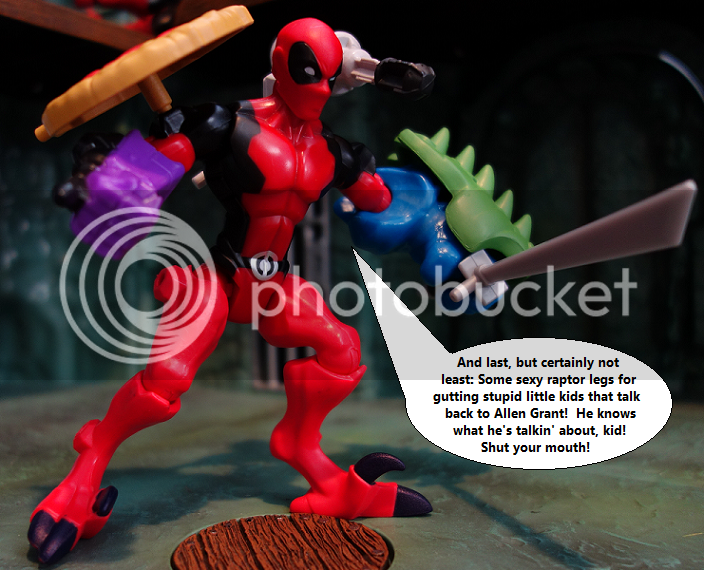 The "A-Bomb" blue arm, green spikes, and pizza come from the recent deluxe Hulk, the purple Skywarp arm and rocket launcher came with Megatron, and the raptor legs came with a raptor, as you might have expected.  The pizza is the real winner, though!  That deluxe Hulk pack is magical, I tell ya.  There's a burger in it, too!  Plus the armored parts are useful anywhere.

I haven't mashed everything yet, but even if you don't, they're chunky and fun figures.  They're easy for small hands, and candy for larger hands.  Trust me man, these are fun for all ages!  If I had any complaints, it would be that many of the weapons have to sort-of "float" above the hands, because the right hands have a peg hole and the left ones are open to fully hold a weapon.  Like the Iceman-Ghost Rider guy I made above: The sword is so high up in his hand 'cause he can only hold the peg (only a left arm with an open hand would be able to hold it without the "floating" look).

Seriously though, it's such a small and adult-collector gripe that it doesn't matter in the slightest.  Every time I tell myself to stop adding more of these to the pile, I find a new one that has PERFECT parts for another creation.  If you wana give these a shot, I suggest getting one from each franchise!  You can only truly understand the Mashing when you have enough random, unrelated parts.